It is no secret that I like visiting Belgium – a lot. From its majestic capital Brussels, to the quaint medieval town of Bruges and pretty city of Ghent,  Belgium is a little under-rated on the tourist map in my opinion.

We had long ago planned to visit Ghent on route to Amsterdam and decided to continue with this plan despite terrorist attacks in Brussels the day before. I’m so glad we did.

Here is my postcard of things to do in Ghent – a pretty medieval city of canals, waffles and enticing looking bars and restaurants.

Ghent – a medieval city in Belgium 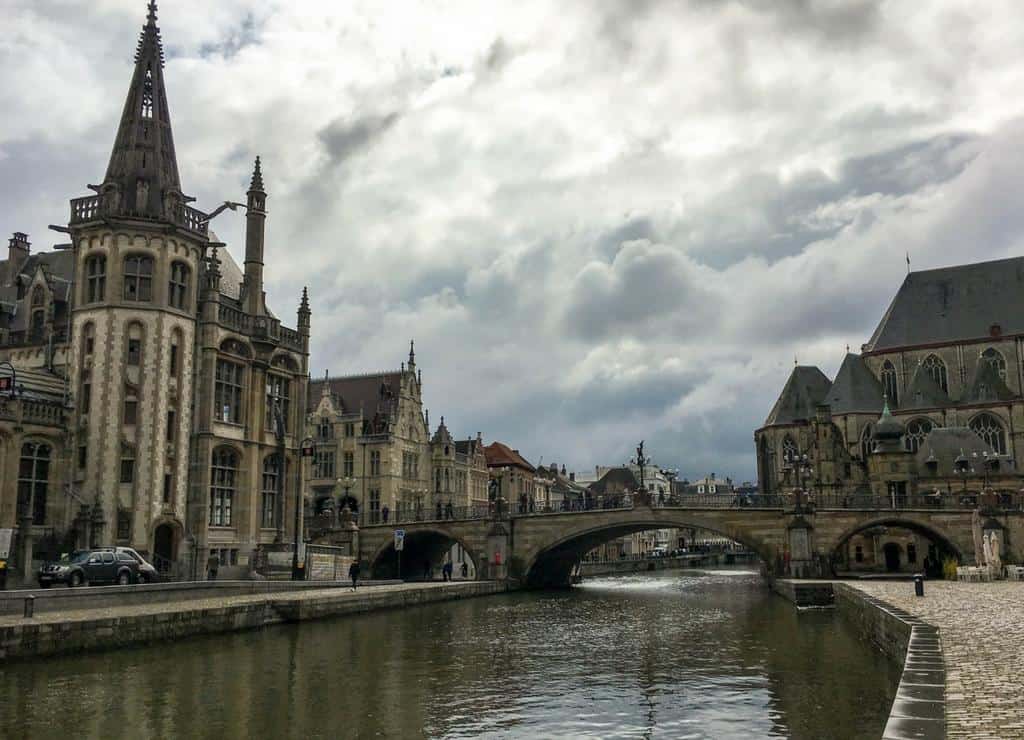 Located on the confluence of the rivers Scheldt and Leie, Ghent rose to prominence in the middle ages and was the birthplace of Holy Roman Emperor, King of Germany and King of Italy Charles V (1500-1558). Now the capital of Flanders, a university city and the fourth largest in Belgium,  Ghent retains its small town feel and medieval heritage with the added bonus of city attractions.

Things to do in Ghent 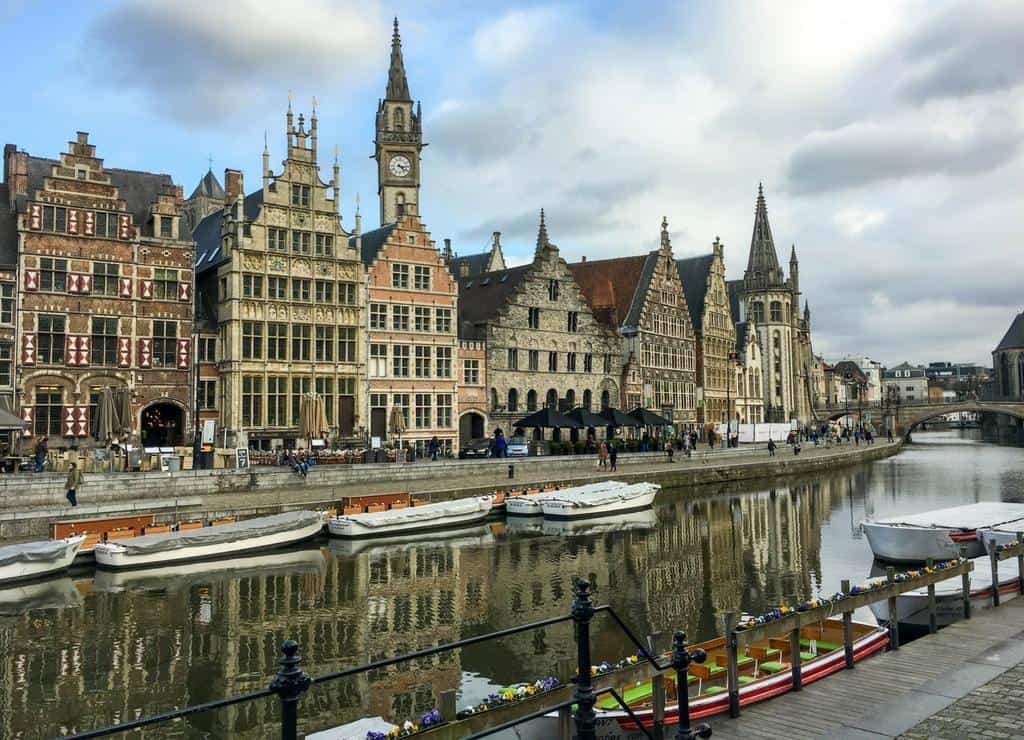 During our afternoon in Ghent, we wandered its pretty streets. The atmosphere was quiet and sombre given the events of the previous day however we could tell the city would usually be a thriving hub of activity. The city centre is mainly pedestrianised except for bikes and trams. Medieval buildings hover over cobbled streets and the old Graslei harbour. 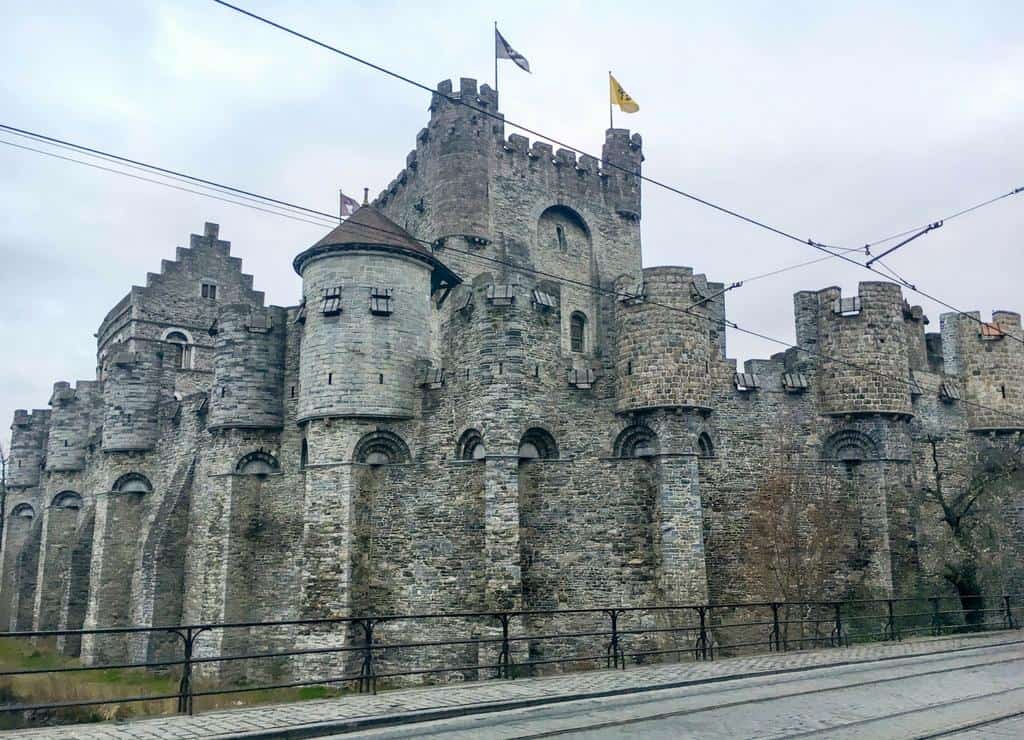 The imposing Gravensteen castle (Castle of the Counts) dating from the 12th century looks over the city. This looks like it would have been a proper working castle to me. As opposed to a decorative one.

We didn’t make it to the top but I am sure the views from the ramparts are amazing. Take a peek inside Gravensteen Castle. 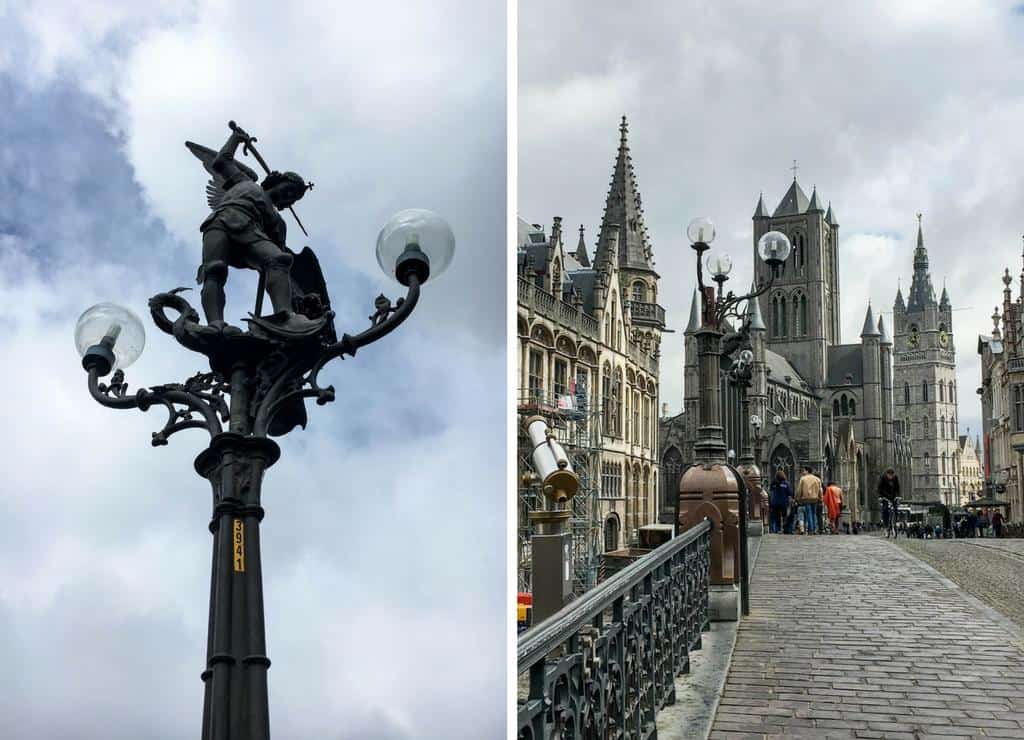 You can spot the Belfry of Ghent from vantage points around the city. It is the tallest belfry in Belgium and is on UNESCO’s world heritage list. Since the 14th century, it has been used to sound the time, and issue warnings and alarms.

The open spaces of the Vrijdagmarkt and Korenmarkt with their outdoor cafe seating and beautiful surrounds also attract a buzz of students and street vendors adding to the atmosphere. By the time we visited the Vrijdagmarkt everyone was heading home for their Easter break. I love the image of this lone cyclist taking a short cut across the square. 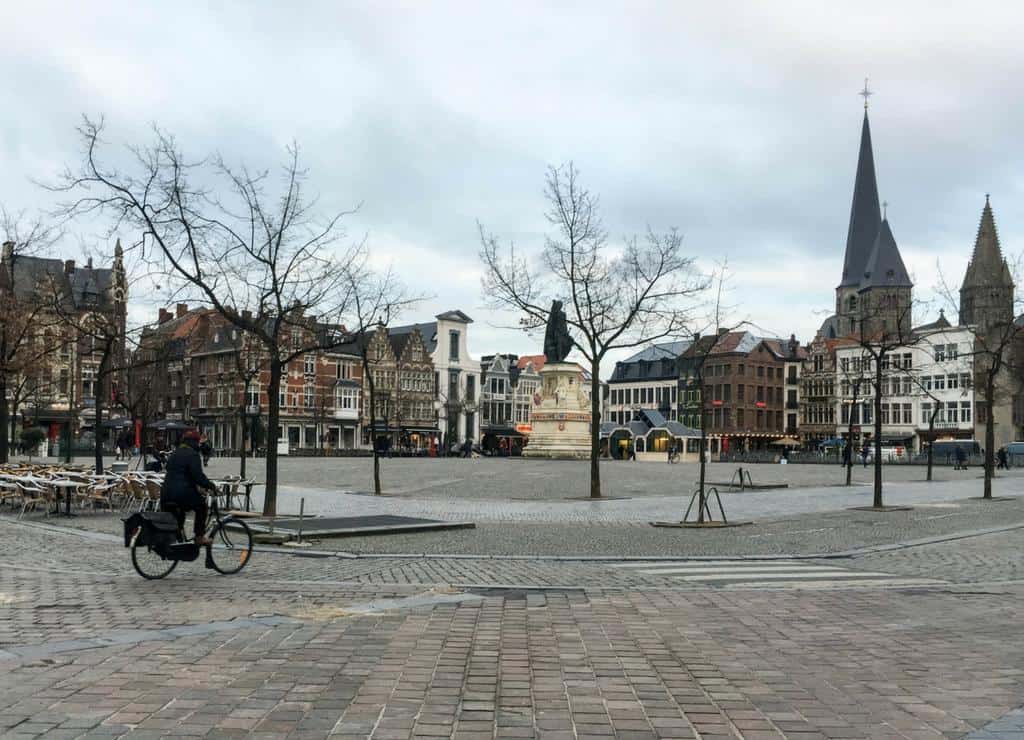 What we ate in Ghent

I can confirm the steak frites are great in Ghent. As are the waffles. And the chocolate. As you would expect in Belgium. There are several local chocolatiers and I recommend Chocolaterie van Hoorebeke for their amazing pralines. 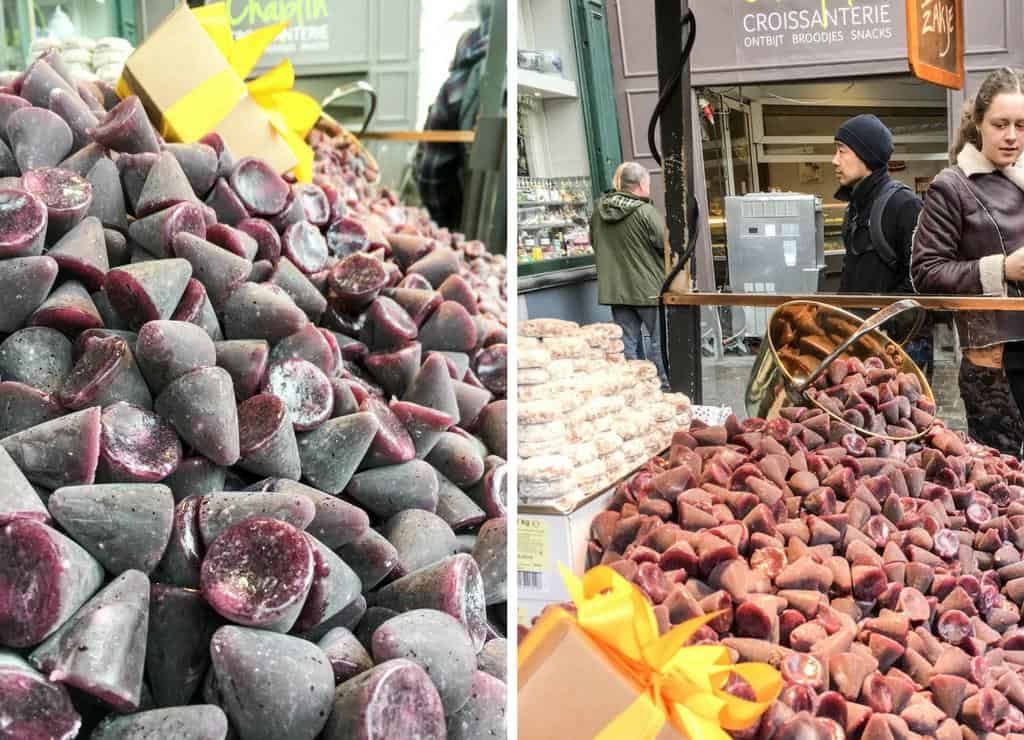 We also sampled the local delicacy – cuberdon, translated into English as “Ghent noses”. Fortunately, they taste much nicer than they sound. They are pyramid shaped fruit jellies made with raspberries and yes they are delicious! My favourite discovery was the ”

My favourite discovery was the “sneeuwballen” or snowballs. These sweets are little puffs of vanilla flavoured soft meringue covered in a thin layer of dark chocolate and dusted with icing sugar. You don’t have to look too far to find these treats as they are sold in the main squares by street vendors.

We like to stay in unusual accommodation when possible however on this occasion a central location and on-site parking were the main requirements. From the Ghent Marriott you can easily reach all the major sites of the town on foot even with a couple of toddlers in tow.

The hotel is modern and comfortable and we slept soundly before our onward journey to Amsterdam.

I commend the professionalism and tact with which the staff at the hotel managed their guests’ concerns over security.

Book the Ghent Marriott hotel or Read reviews on Tripadvisor

Reasons to return – things we missed

As we wandered the streets of Ghent we couldn’t help but notice all the little restaurants and boutiques showcasing local and international cuisine and design. 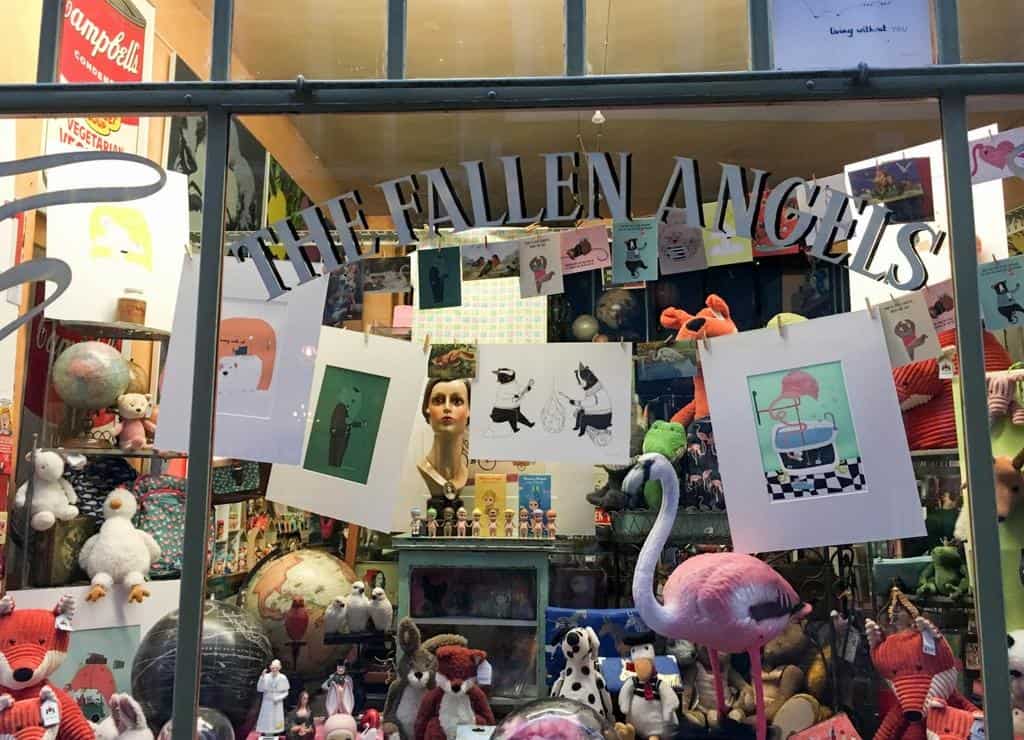 Through open windows, we could see finishing touches being put on enticing menus and table settings. I saw tapas and pintxos bars, fine dining establishments, and elegant cafes. None of them suitable for a couple of 2-year-olds and their slightly frazzled parents! 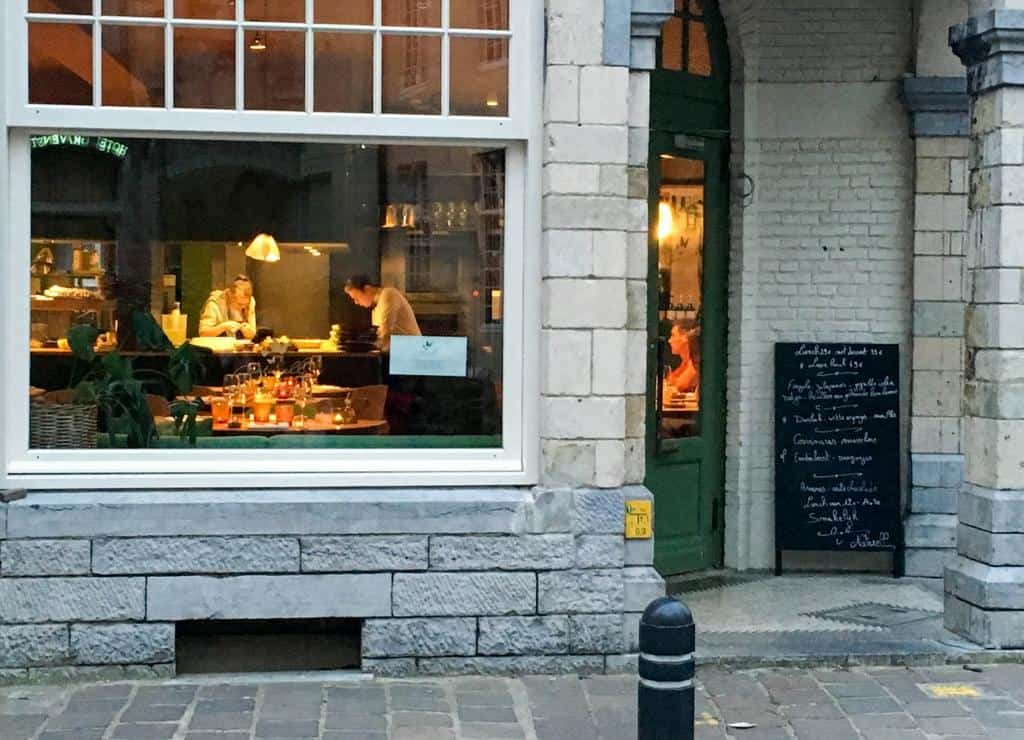 More things to do in Ghent

✪ the local Design Museum has an excellent reputation

✪ Take a boat tour of the converging rivers

I’m looking forward to returning to Ghent again soon. Maybe next time without kids in tow so we can explore the galleries, restaurants and independent shops at leisure! 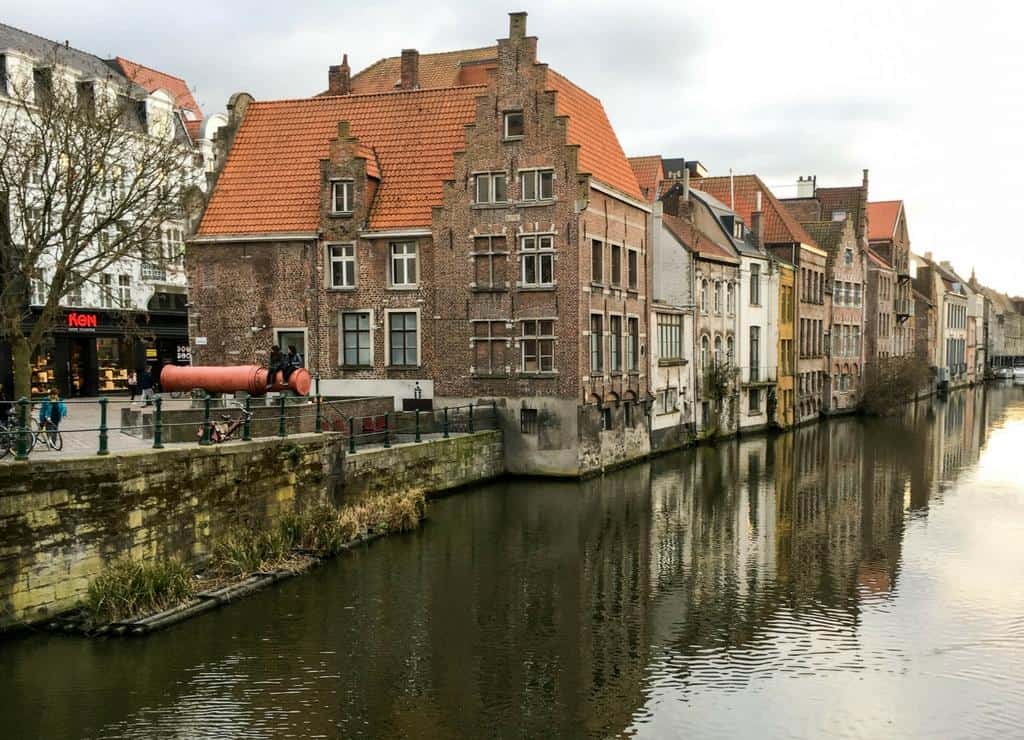 Discover our travels in Belgium 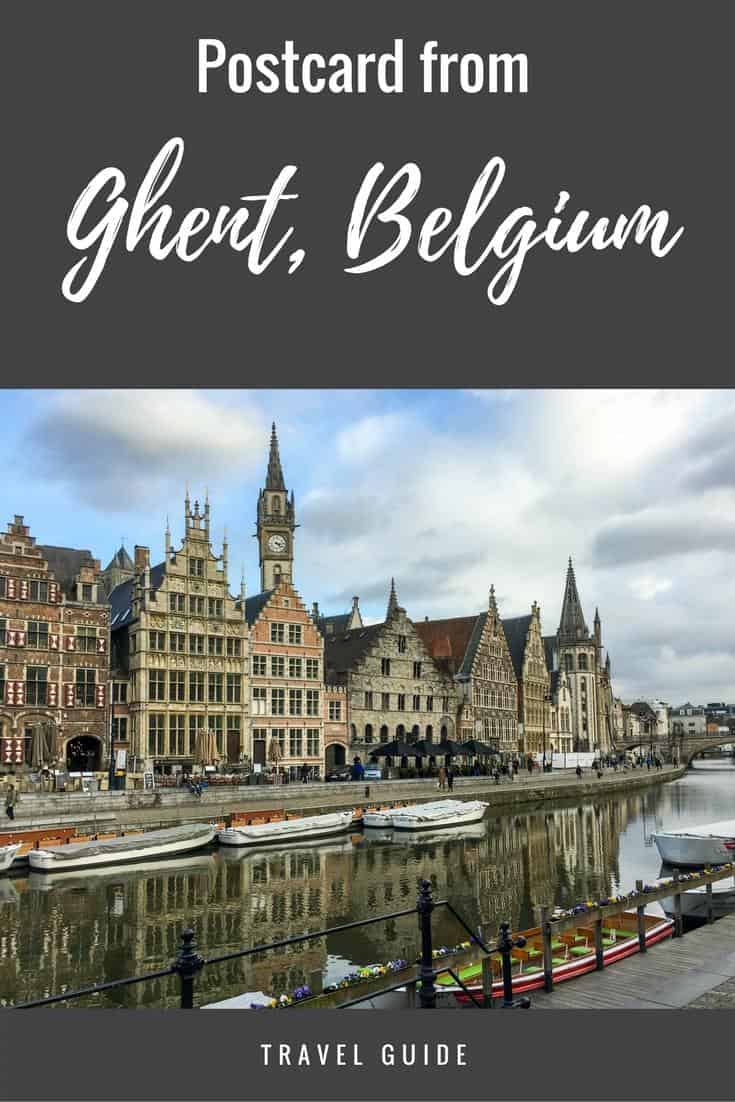 Disclosure: There are some affiliate links in this post. These are links to products and services we highly recommend. We don’t put anything on this site that has not been verified and/or personally used. Read our full policy on our disclosure page.