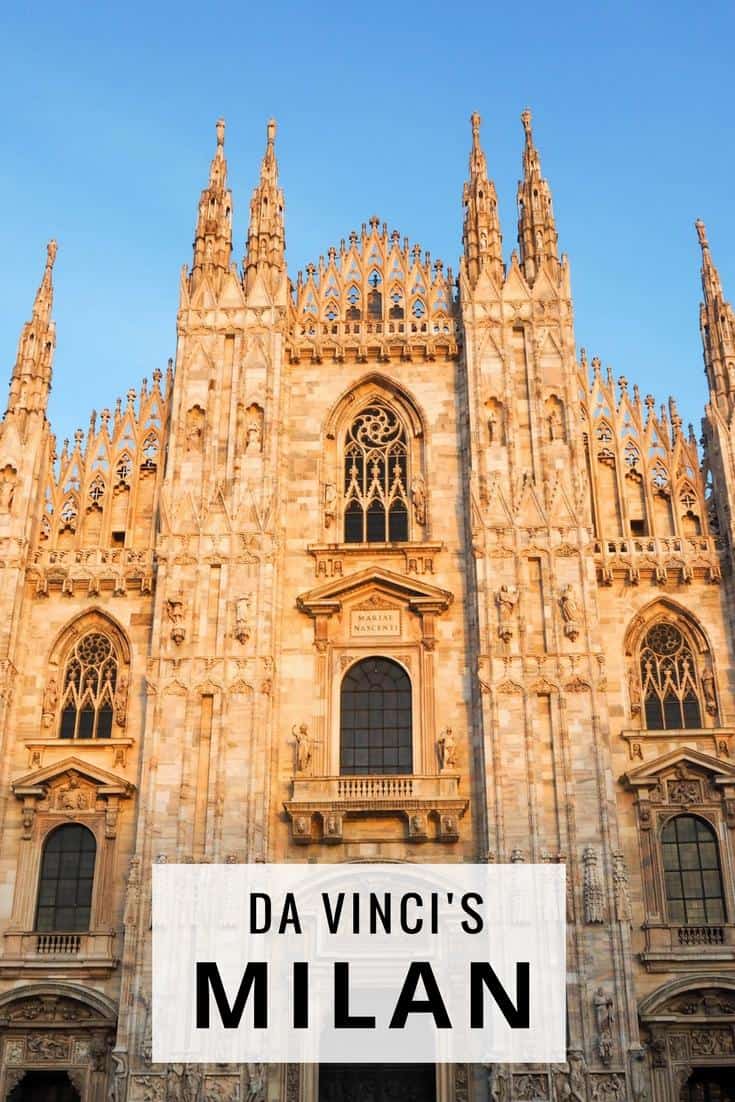 “Once you have tasted the taste of sky, you will forever look up”

Leonardo was right. A visit to Milan is as much about looking up at soaring buildings and exquisite art as looking around.

I’ve been fascinated with the Italian Renaissance since I studied the history of Florence and Venice during that period at high school. The explosion of learning and art in that era is unsurpassed even to this day.

Of course, Leonardo da Vinci was one of the most prominent figures of the Renaissance, and on a recent visit to Milan, I was intrigued to learn about the impact he had on his adopted city beyond his most famous work ‘The Last Supper’.

Often described as the quintessential ‘Renaissance man’, Leonardo Da Vinci was born in Florence in 1452. In the Tuscan city he learnt the artistic skills that brought him to the attention of the Sforzas – a powerful Milanese family.

Trained as a painter, sculptor and artist da Vinci developed his interests further and acquired skills in engineering, anatomy, architecture and botany. He had an unquenchable thirst not just for acquiring knowledge but also in applying this knowledge. 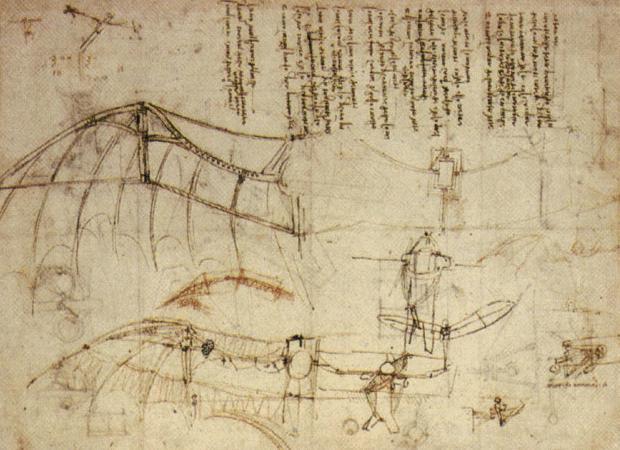 Leonardo lived in Milan for over 20 years of his life and was commissioned to assist with many of the Sforza’s ambitious artistic and engineering projects. In Milan his talents were appreciated and used for the benefit of the city.

Da Vinci died in 1519 aged 67 having amassed an incredible body of work across a broad range of disciplines. He was widely mourned by his peers but his reputation continues to grow. 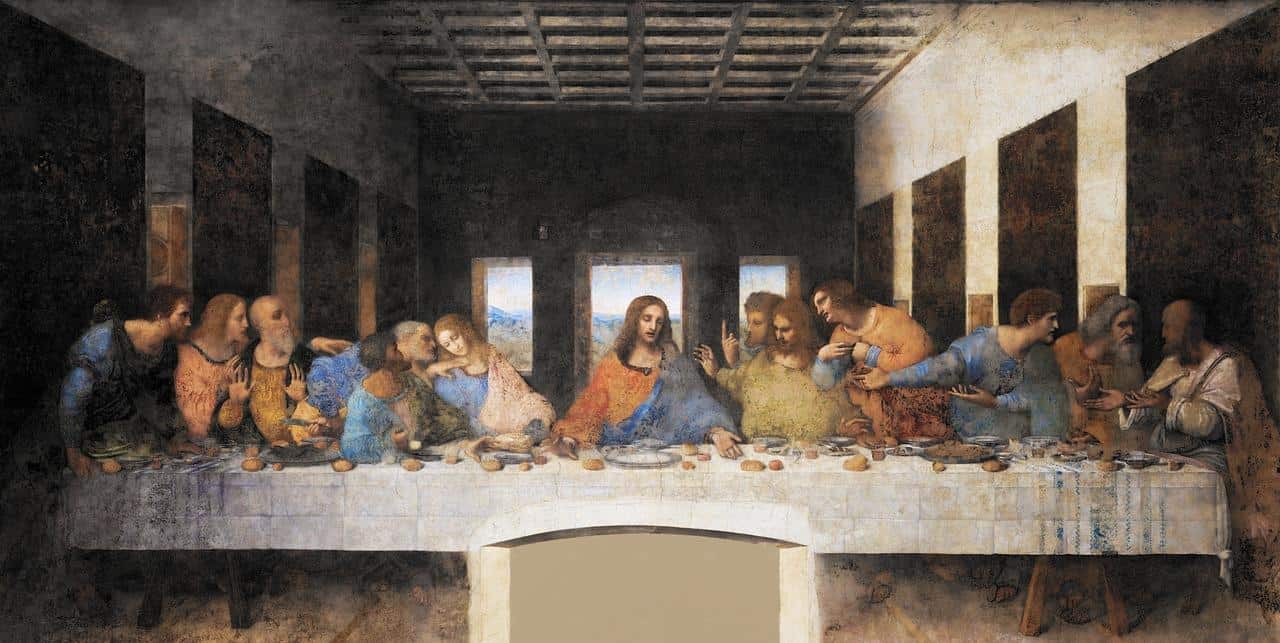 Your visit to Milan would not be complete without viewing one of the world’s most famous paintings. ‘The Last Supper’ (Il Cenacolo) was commissioned by the Da Vinci’s patron Ludovico Sforza – the Duke of Milan – as the centrepiece of his family’s mausoleum.

The Last Supper is notable for its subject matter – the moment Jesus announces he will be betrayed by Judas, one of his followers. The techniques used by da Vinci to create the painting were unusual and innovative though in the end proved almost disastrous as it began to deteriorate almost immediately.

The painting is undeniably beautiful in an ethereal way that cannot be captured on film. This is the mark of da Vinci’s genius – translating the faces of ordinary people whom he used as his subjects into a simple but extraordinary scene.

Da Vinci’s iconic painting is not found in the church of  Santa Maria delle Grazie but on the wall of the adjacent refectory. It has survived the centuries despite damage and some incredibly bad decisions by people who really should have known better. The painting was completed in 1498 and is one of 51 UNESCO World Heritage Sites in Italy.

Tip – you must take a tour to view Da Vinci’s ‘Last Supper’ and tickets sell out well in advance. We booked ours on tours booking site Get Your Guide and were impressed by the knowledge and engaging manner of our guide who brought the painting and its history to life with her commentary.

‘The Last Supper’ is an important stopping point on your visit to the city however if you dig a little deeper you will find that there are many other ways to discover da Vinci in Milan.

In recognition of Leonardo’s work ‘The Last Supper’ Ludovico Sforza gave him a vineyard opposite the church and refectory of Santa Maria delle Grazie. Da Vinci had a sizeable plot over a hectare long in the grounds of the famous San Vittore vineyard.

Recent excavations of the site showed the vineyard to be almost as it was in the 16th century and on the occasion of the 2015 Milan Expo experts from across Italy joined together to recreate Leonardo’s vineyard. Experts even revived the original grape variety using analysis of soil composition and organic matter found at the site.

You can visit Leonardo’s Vineyard in Milan in the grounds of the beautiful Casa degli Atellani. 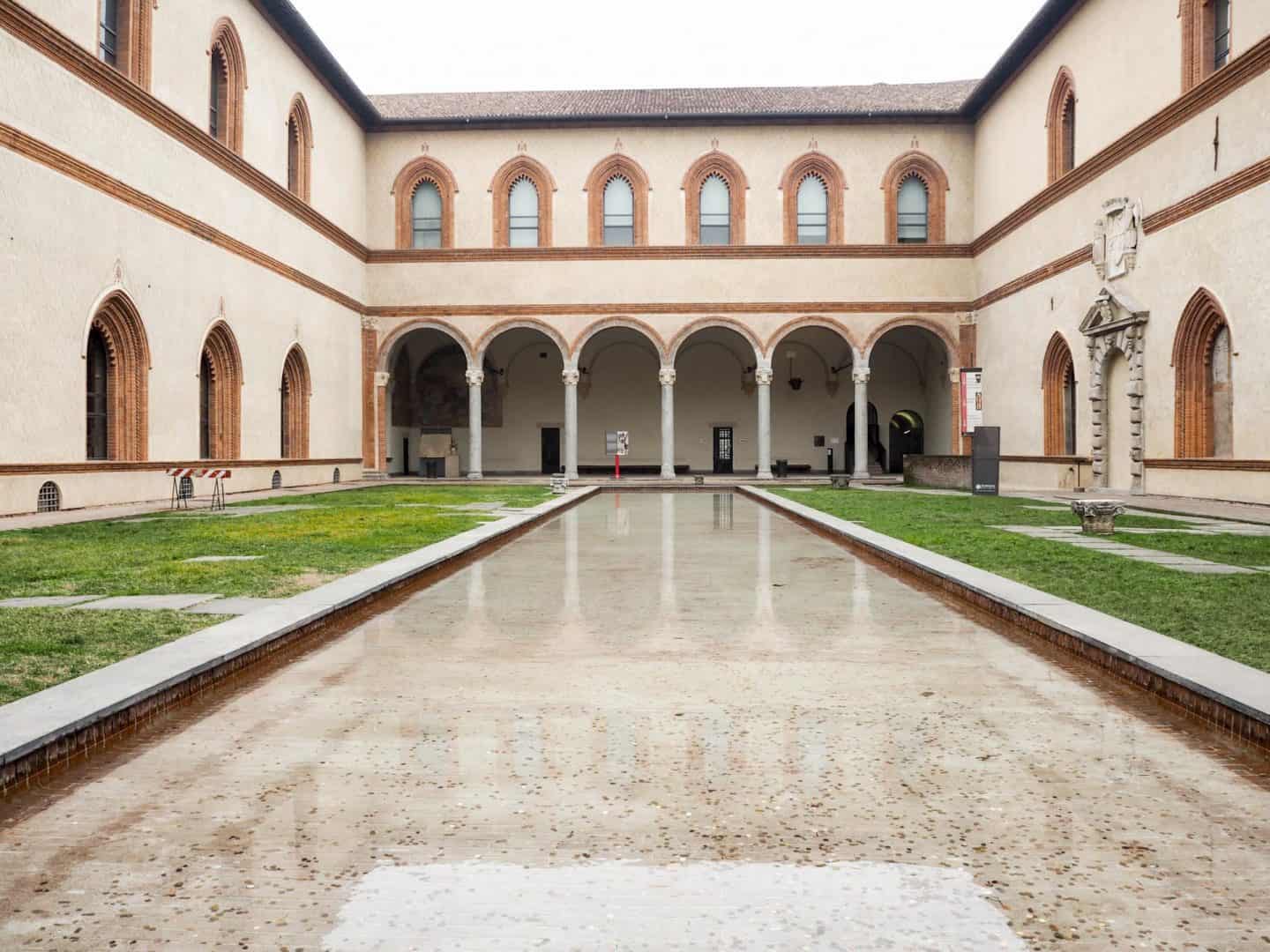 Da Vinci’s patrons the Sforza family commissioned the artist to paint several frescoes in their citadel, one of the largest in Europe. Now housing some of the city’s best museums dedicated to the Renaissance period, the Castello Sforzesco is home to some important work by Leonardo.

Da Vinci was asked to paint the ceiling in the castle’s great hall – the Sala delle Asse. Today you can see the ceiling painted with a canopy of trees with intertwined branches. Glimpses of the sky are seen through the branches.

Over the years the buildings were misused and left in a state of disrepair so conservation efforts are long, expensive and ongoing. Sadly the exhibition was closed during our visit.

4 | Canals of the Navigli

In the 1930s many of Milan’s canals were covered to make way for roads to support the arrival of cars to the city. Before this Milan had a canal system much like that found in Venice and its system of locks owed much to the influence of Leonardo da Vinci.

Milan was built on swampland and convergence of several rivers. From the 12th century, canals were built to transport goods and services to and from the city including the marble to build the city’s famous cathedral.

In time of peace I believe I can give perfect satisfaction and to the equal of any other in architecture and the composition of buildings public and private; and in guiding water from one place to another.

When Da Vinci arrived in Milan work was underway to modernise the canal system. There is considerable evidence of Leonardo’s involvement in this project however his greatest contribution was the invention of the canal miter lock. An invention still in use in most waterways across the world today.

In Navigli, a popular area with bars, restaurants and boutiques  you can see the city’s last remaining canals.

Visit the Ambrosiana Library (Veneranda Biblioteca Ambrosiana) and you can see drawings from da Vinci’s Atlantic codex. This is the largest collection of Leonardo’s work donated to the Ambrosiana by the Marquis Galeazzo Arconati in 1637.

Included in the 40 volume collection are 1119 original pages, with approximately 2000 drawings and notes dating from 1478 to 1519. The codex displays Leonardo’s interests in anatomy, architecture, engineering and hydraulics.

How did da Vinci come to influence Milan’s signature dish – risotto alla milanese? On a fascinating food tour of the city I discovered that the artist arrived in Milan around the same time as the Sforza family introduced rice growing to the Lombardy region. Rice production requires a lot of water and it is believed Leonardo’s skills in irrigation may have been used to develop techniques to effectively grow the arborio rice.

If you want to try risotto alla Milanese cooked to the traditional recipe using a broth made from five types of meat visit Trattoria Masuelli San Marco on Viale Umbria, near Piazzale Martini. The trattoria has been cooking risotto to this recipe since 1921. 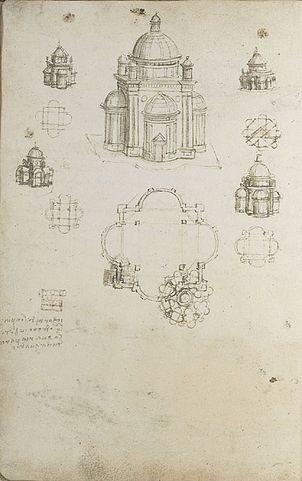 Milan’s Duomo is one of its enduring icons. The second largest cathedral in Italy it was built over the course of 600 years. When Leonardo arrived in the city, the court architects were trying to build a domed crossing tower on top of the intersection of the transept, nave and chancel. Da Vinci completed some initial drawings for the dome which were never used.

Today Milan is a modern and bustling city. Almost completely destroyed during the Second World War, the city does not have the immediate and captivating beauty of Rome, Venice and Florence. 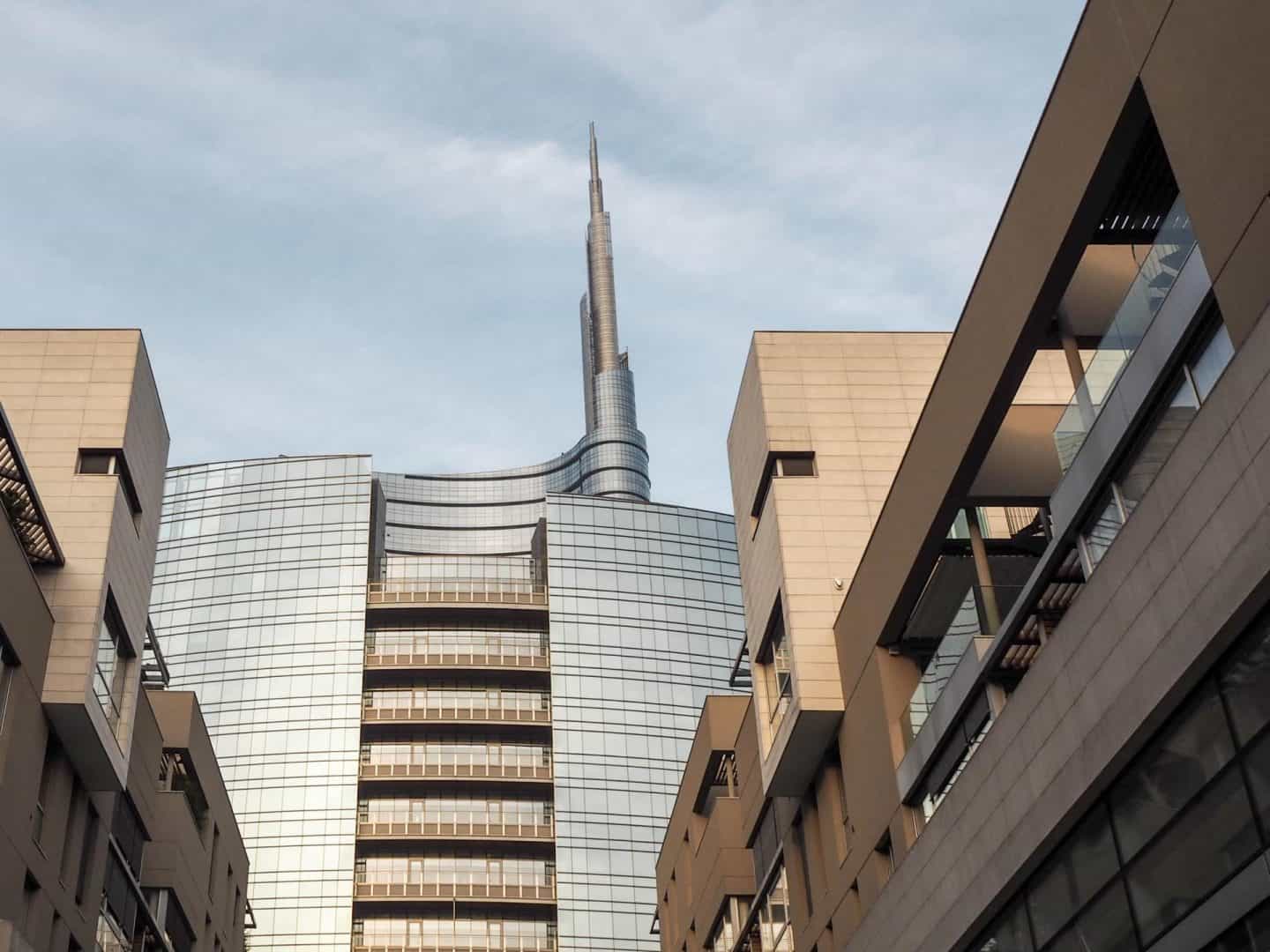 Instead, what you see today is a modern city with an obsession with design and new architectural techniques, much like da Vinci was in his day.

Leonardo Da Vinci lived in Milan for 20 years of his life, and his influence on the city is significant. Thanks to the patronage of the Sforza family and the preservation of many of his works we can still see, feel and even taste the impact the great artist and inventor had on Italy’s largest city. 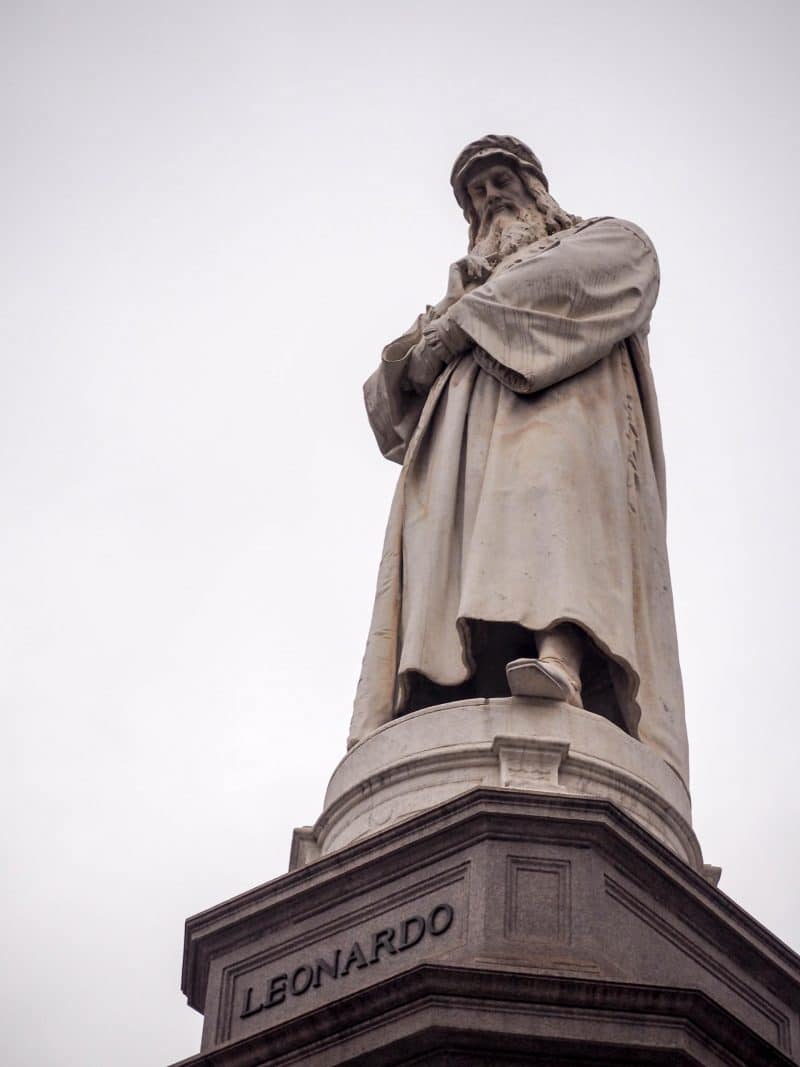 A thoughtful statue of our Renaissance hero stands in the Piazza della Scala in the shadow of the magnificent Gallerie Vittorio Emmanuele II. Of course you must look up to feel the full impact of Leonardo’s gaze upon the citizens of Milan.

Have you visited Milan and did you see da Vinci’s Last Supper?

Were you inspired to learn more about Leonardo da Vinci? 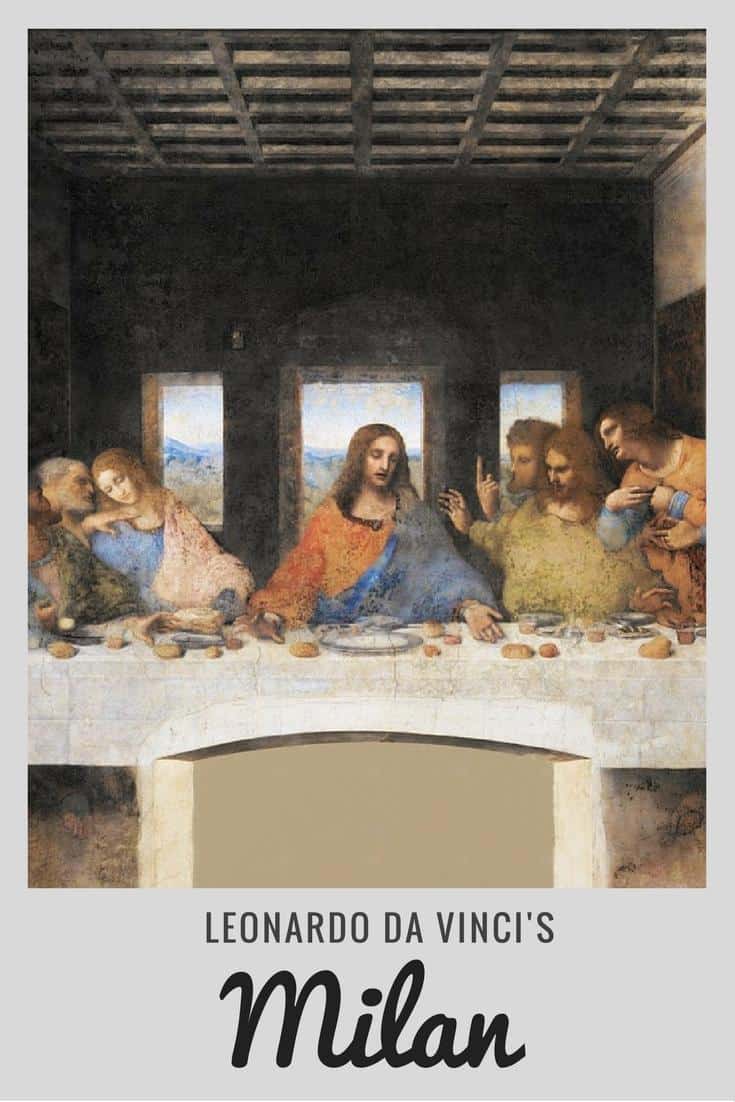 Disclaimer – This post includes affiliate links. I only promote goods and services for products I have tried and would recommend to friends and family. For more information on our affiliate policy please visit our disclosures page.