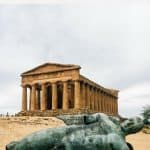 Transport yourself back to the 6th century BC and the time of the Ancient Greeks when you visit Agrigento and the Valley of the Temples in Italy.

This incredibly well preserved series of temples and buildings is one of Italy’s most famous archaeological sites and a must visit on your trip to Sicily.

Here you wander in awe of the civilisation that built and lived among the huge monuments and wonder how they stood the test of time. 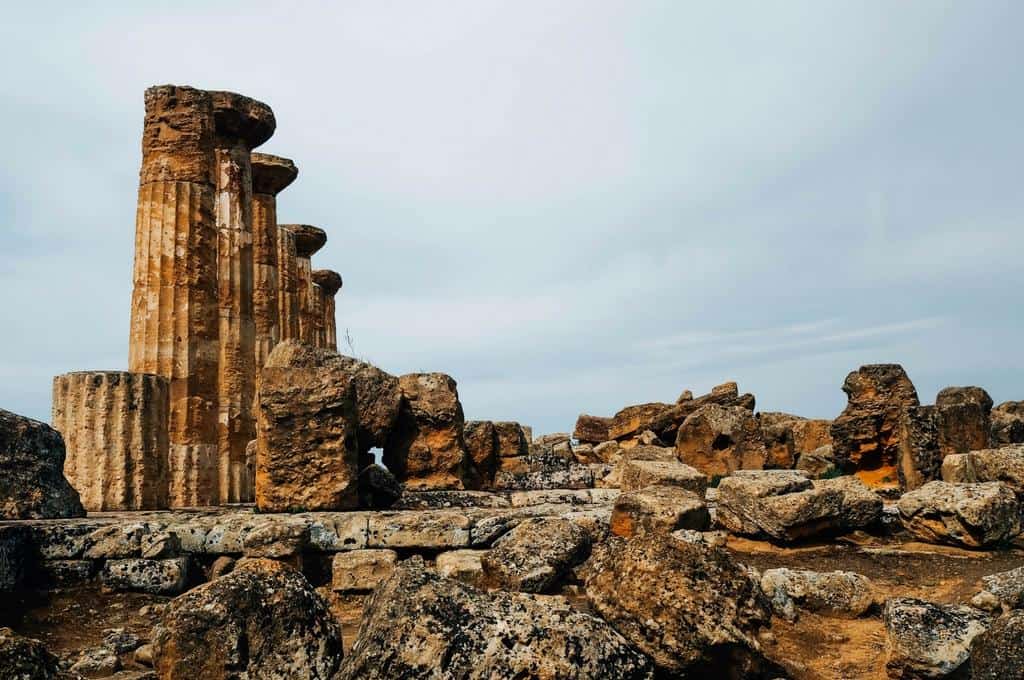 Almost 2,000 years ago, before the rise of the Roman Empire, Greeks ruled Sicily and left their mark with a series of important cities and sites.

Where Agrigento and the Valley of the Temples are found today was the huge site of Ancient Akragas, a wealthy city of as many as 500,000 people and one of the most important in Ancient Greece.

The city was founded in around 580 BC and prospered until it was conquered and destroyed by the Carthaginians in 406. Over the centuries the area was under Roman, Arab and Norman control, largely due to its strategic position overlooking Porto Empedocle and the Strait of Sicily. All left their mark at Agrigento and the Valley of the Temples shows evidence of all these civilisations.

It wasn’t until the 19th century that the area was rediscovered by archaeologist Domenico Antonio Lo Faso Pietrasanta and restoration work began.

Along with the amphitheatres in Taormina and Syracusa, the Parco Valle dei Templi are some of the most impressive Greek ruins in Sicily, if not the world. The park was awarded UNESCO World Heritage status in 1997.

Main sights at the Valley of the Temples Sicily 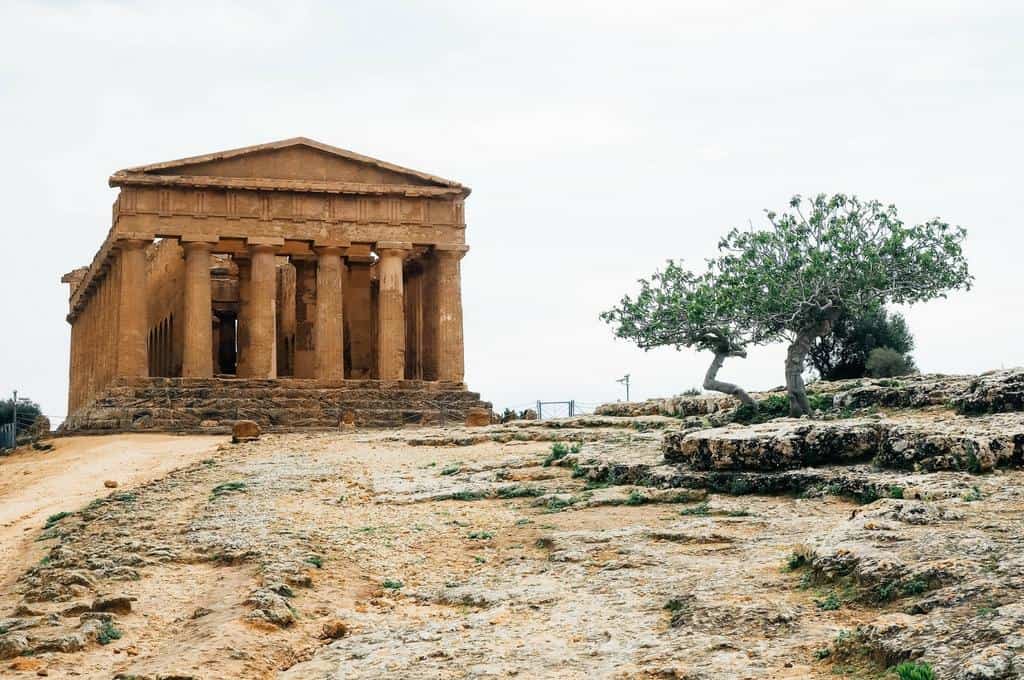 The site at Agrigento is not a valley in fact, but a ridge, sitting 230 metres above sea level. Akragas’ ancient temples stand looking majestically out to sea and the surrounding countryside. They are a formidable sight now, so I can only imagine the awe they inspired in the people that lived in the city when it was built and those that came after.

As you walk through the site, the doric columns of the temples rise before you and you wonder.. how were they ever built and raised? Who were the architects and builders? And what inspired such worship? 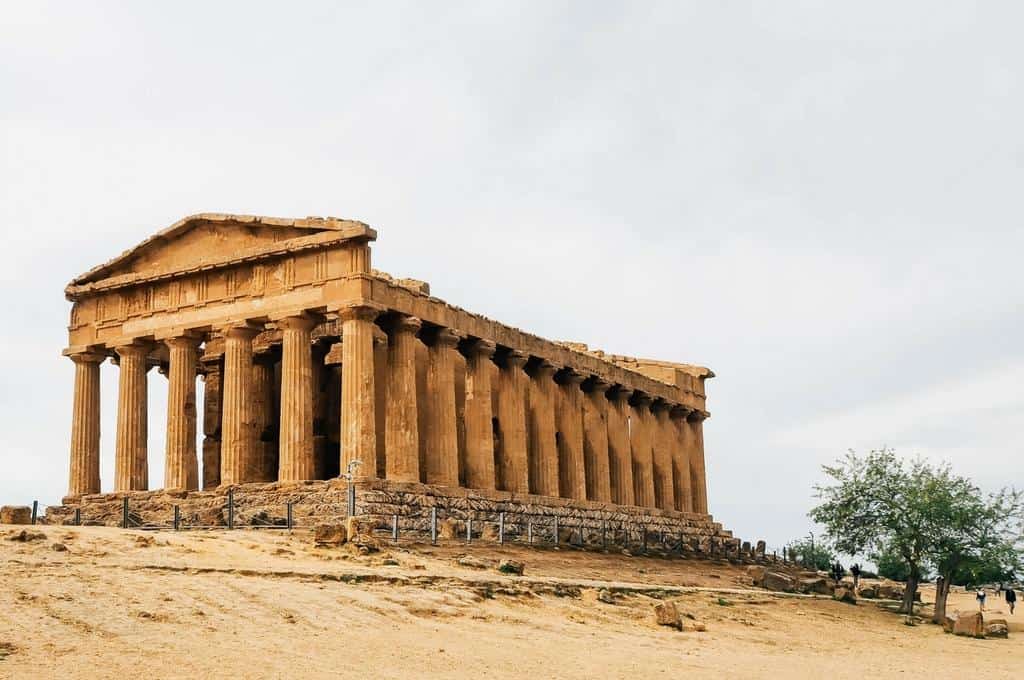 Standing almost as it did when it was first built in around 440BC, the Temple of Concordia is simply an incredible sight. One of the best preserved Greek temples found anywhere in the world, at its highest point the monument is almost 17 metres. Each of the 78 columns measures 6 metres and is decorated with flutes or ridges.

The temple is named after the Roman goddess of harmony. The broken statue of Icarus that lies dramatically near the base of the Temple of Concordia is a modern interpretation of the classical style by Polish artist Igor Mitoraj. Icarus with the broken wing is all that remains of an exhibition of 17 statues by the artist that took place at the Valle dei Templi in 2011. 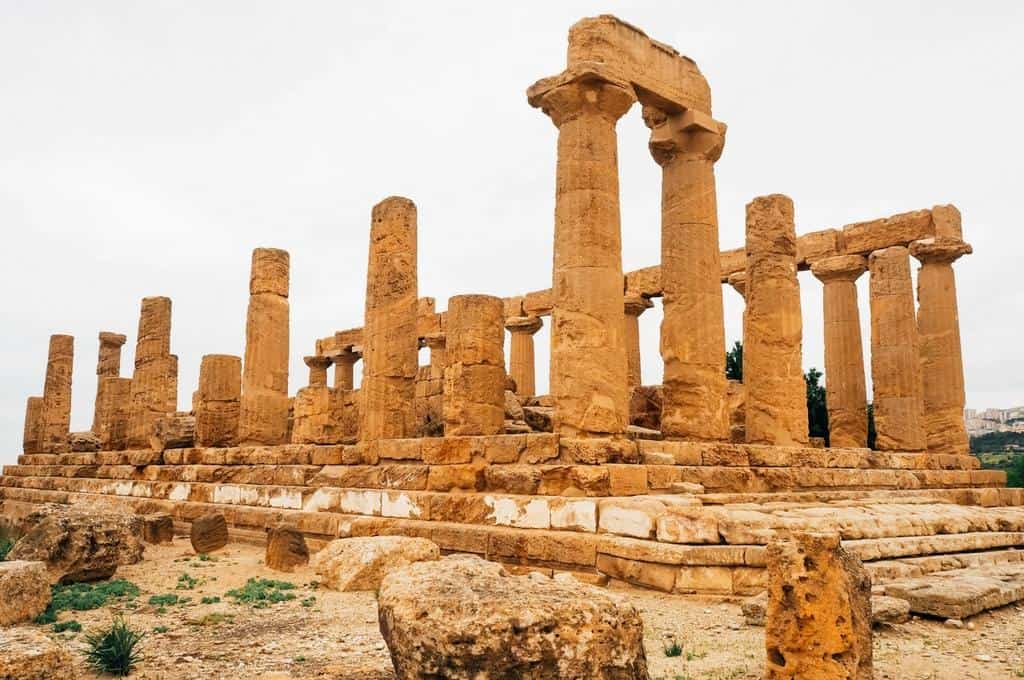 This temple celebrates Juno (Hera in Greek) – the protector and special counsellor of the state.

Similar in size to the Temple of Concordia, the Temple of Juno is also an example of the doric style. While Concordia is magnificent in its preserved state, I love the faded beauty of this temple that has stood through the centuries. 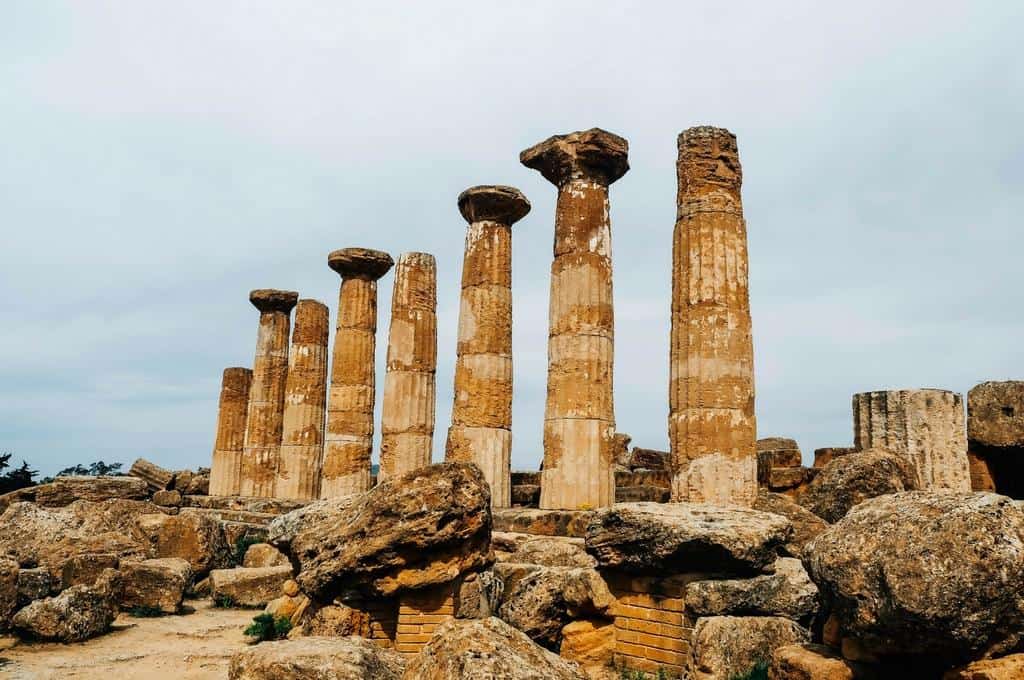 Thought to be the oldest of the temples due to the style and number of columns, the temple is dedicated to  Heracles (Hercules in Latin) the son of Zeus.

Temple of Castor and Pollux 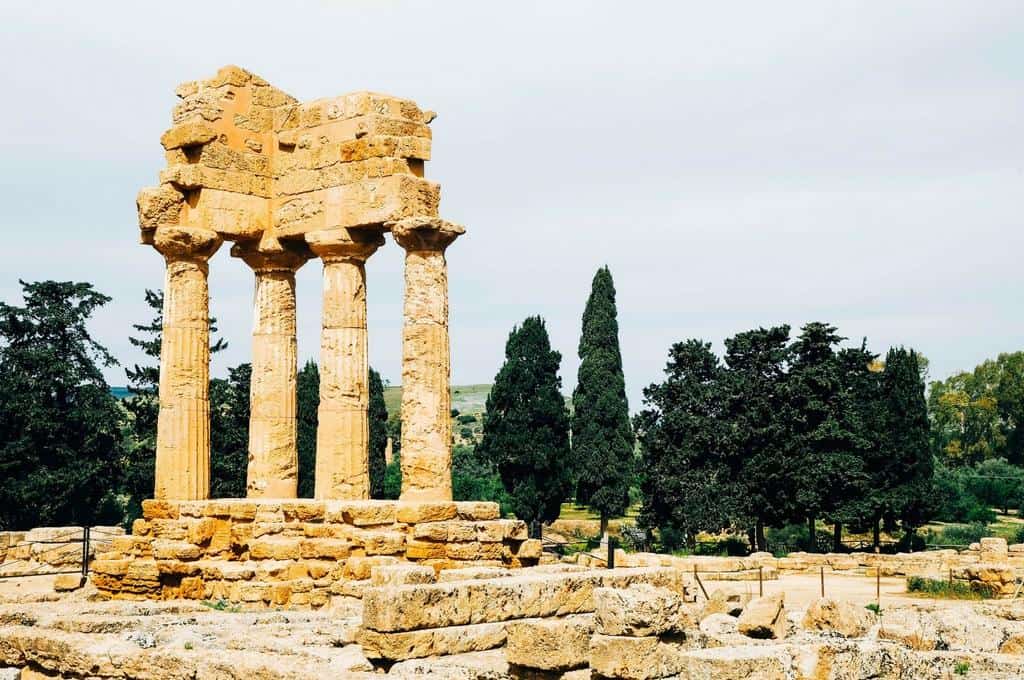 In the 19th century, pieces of several monuments were used to build this structure which is now the symbol of modern Agrigento.

What is now a beautiful garden full of citrus and olive trees was once an enormous swimming pool for the Ancient Greek inhabitants of Akragas. Eighteen tunnels fed the pool with water collected from higher ground that had been passed through a complex system of aqueducts. 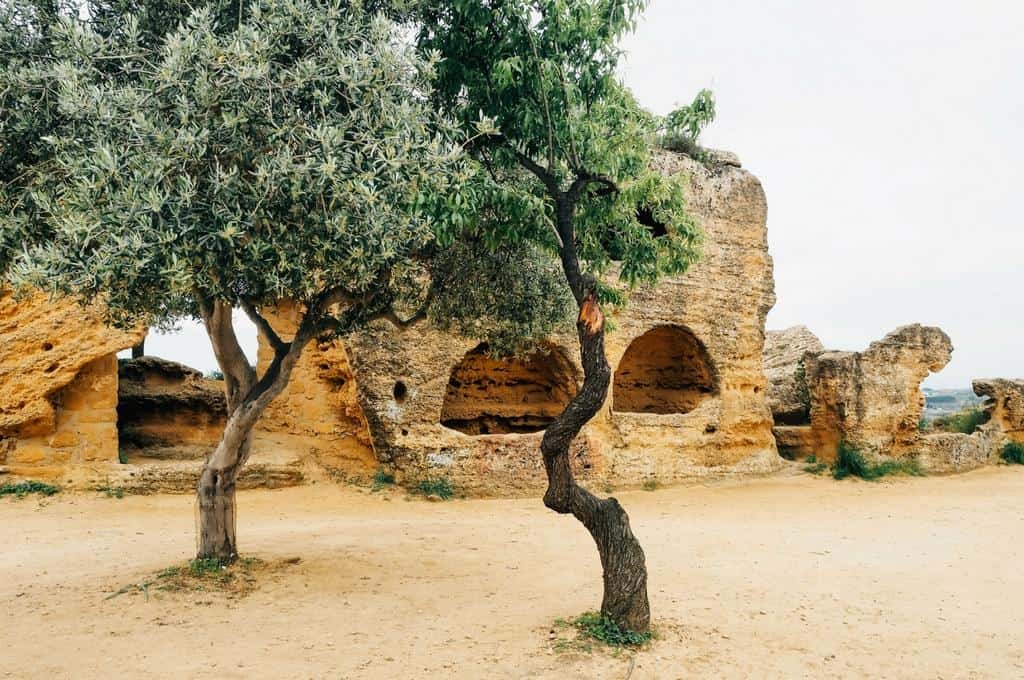 Fashioned out of existing cisterns, these burial holes date from the late-Roman and Byzantine eras. There are spectacular views of the coast through some of them.

Tips for visiting the Valley of the Temples near Agrigento

We found there wasn’t great information for visiting the site so have put together this guide to help with planning your visit to Agrigento.

Map of Valley of the Temples near Agrigento

Valley of the Temples hours and tickets

Allow around 3 hours for your visit. There is a lot to explore along the 2.5km route.

Ticket prices are €10 for adults which includes an audioguide [August 2017] Children under 18 are free – do bring ID for teenagers. There is a separate admission of €3 to enter the Garden of Kolymbethra.

You can only buy tickets at the main entrances at Porta Quinta Sant’Anna and near the Temple of Giunone (Temple of Juno). 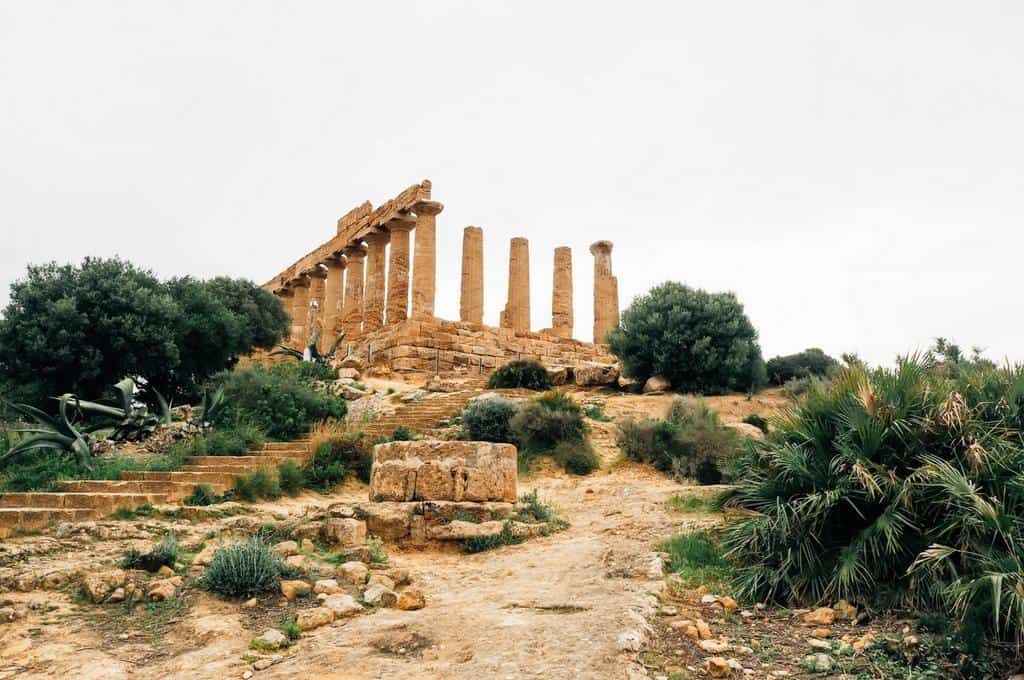 You can visit the Valley of the Temples all year round however there are some things to consider. In summer temperatures are often 35-40 degrees centigrade on the ridge so you might want to consider visiting very early in the morning or in the evening just before sunset.

During the summer months, you can visit at night time when the temples are illuminated – an absolutely spectacular sight.

What to wear and bring with you

As I mentioned earlier, the site is on a fairly exposed ridge and is about 2.5 kilometres in length. Make sure you have comfortable walking shoes in all seasons as the path is rocky and rough in places.

If you visit in summer make sure you bring plenty of water, a hat, sunscreen and some snacks unless you want to stop at the onsite cafes and restaurants.

During winter you will need a jacket and water too.

Walking through the site 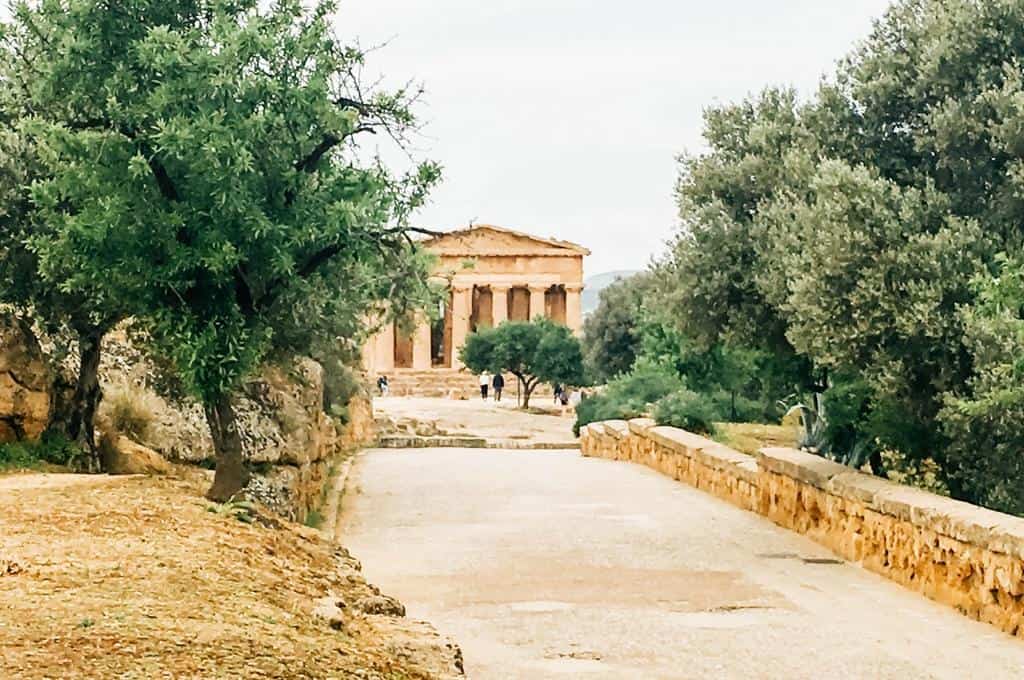 I think the best way to view the site is to walk from one entrance to the other. The distance is around 2.5km and it is quite an easy walk along a man made path though the ground is a bit rocky at times if you want to get closer to the monuments.

We visited with our three year olds and they managed well without a stroller but with lots of stops along the way.

Please note – you can get close to but not clamber over the Concordia and Juno temples for obvious safety and conservation reasons.

Guided tours are offered at the entrance or you may choose to read the many detailed boards of information at each monument written in English and French as well as Italian.

How to get to the Valley of the Temples 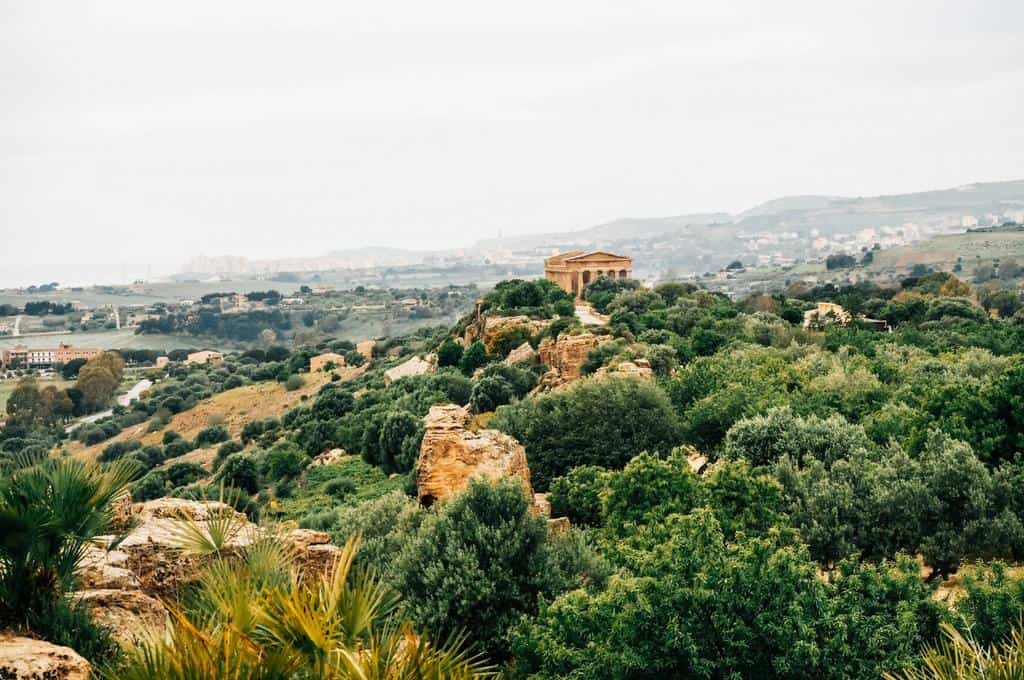 Many people visit Agrigento on a day tour from Palermo or Catania – here are some options:

Please note – for some reason individuals must buy their tickets from the ticket offices on site which can be frustrating if you have prepaid a tour!

But if you want to take your time exploring this amazing site and the Agrigento area – and you should – your best bet is to hire a car and spend some time in the area. Driving in Sicily is fine if you do some pre trip preparation – read our tips on driving in Italy  if you are unsure.

We recommend using Auto Europe because of their flexible drop off and pick up options and competitive prices.

You could also take a taxi from Agrigento for about €10 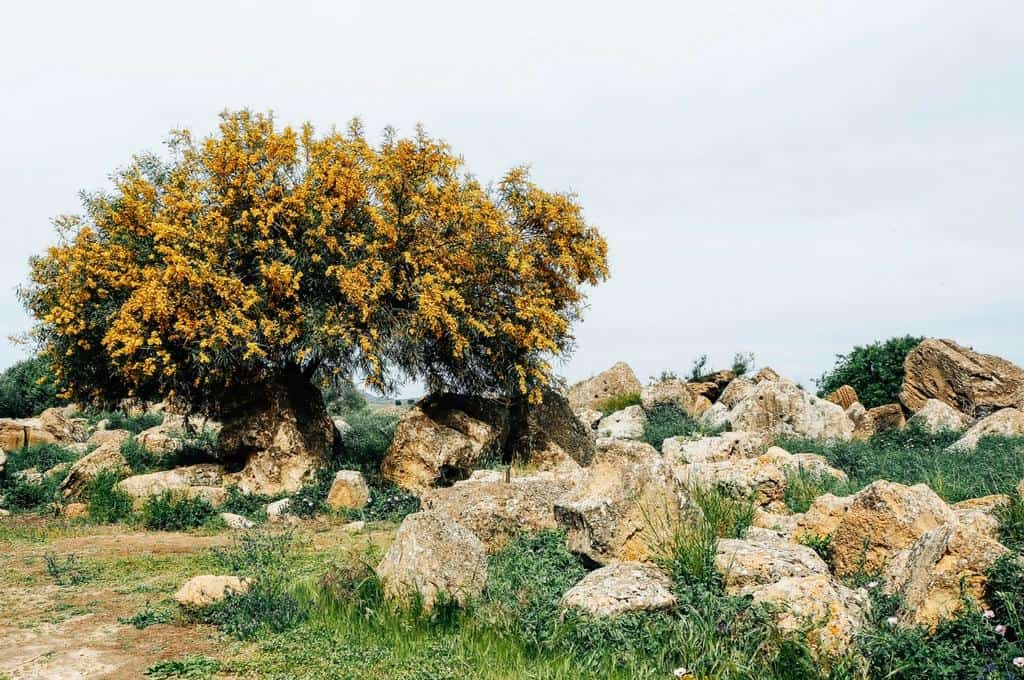 Parking at Agrigento’s Valley of the Temples

Parking at Parco Valle dei Templi is safe and easy. There are two car parks located at the main entrances – Porta Quinta Sant’Anna and near the Temple of Giunone (Temple of Juno) ticket office on Via Panoramica Valle dei Templi. The cost seems to vary between €2-5 – for no known reason except.. it’s Sicily!

If the weather is hot, cold or you are travelling with children or people with mobility issues I recommend taking one of the local taxis from where you parked to the opposite entrance so you only need to walk one way through the 2.5 kilometre site.

It does seem like a bit of a scam at €3 per person but it is a long day out in the elements exploring the site and your feet will thank you at the end of the day.

Have you been to Sicily’s Valley of the Temples? I would love to return for the sunset visit – how magical! Do let me know if you have any questions that remain unanswered – I’m happy to help.

Disclosure: There are some affiliate links in this post. This means that if you choose to make a purchase after clicking on one of the links I may receive a small commission. Your purchase will help support this site and my coffee habit. Read my full disclosure policy.