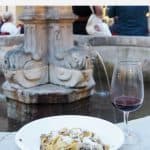 Translated – Eat to live and not live to eat

How could you go to Italy and not enjoy the food? It is, of course, one of the delights of travelling in Italy and one of my passions. But food in Italy is more than about taste.

It’s about respect for the land, the people who produce food and wine and the ancient knowledge and traditions that have been developed and refined over many centuries. This philosophy is often called slow food.

On a recent trip to Brescia in East Lombardy, I met some of the producers, cooks and wine makers and tasted their amazing food and wine at a special dinner in the streets of the city.

The Slow Food movement in Italy 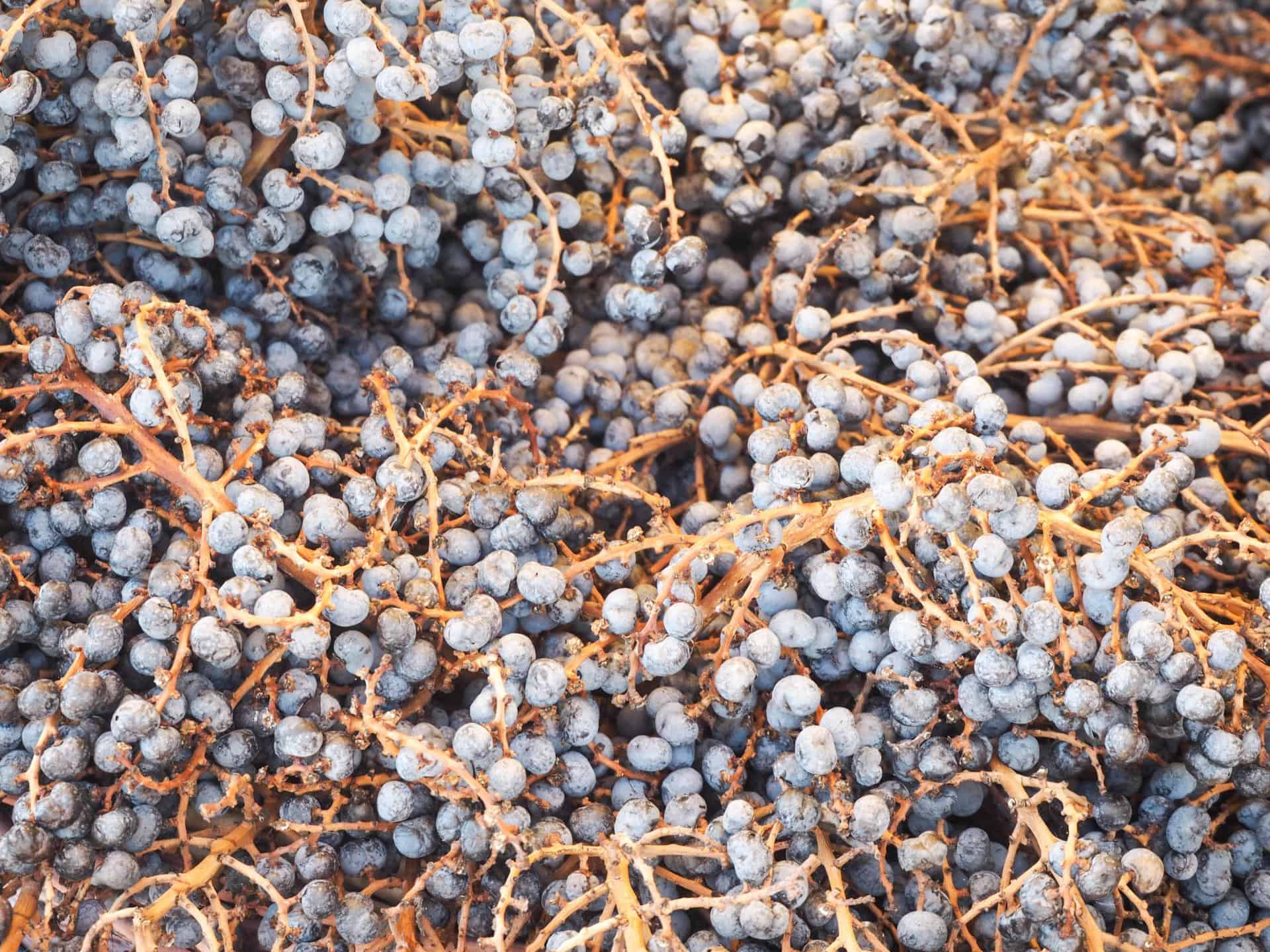 Founded in Italy in 1989 as a response to the increasing industrialisation of food production, the Slow Food movement is an international association that promotes good, clean and fair food across the world. The movement has evolved to become a global organisation present in over 160 countries and involving millions of people.

From the very beginning, Slow Food championed regional traditions and biodiversity – the understanding of local food varieties and production processes.

“Food history is as important as a baroque church. Governments should recognise cultural heritage and protect traditional foods. A cheese is as worthy of preserving as a sixteenth-century building”

The movement believes that if we understand where our food comes from and how it was produced, then we can make better choices about the food we buy and enjoy it more.

There is no better way to do this than to meet the producers themselves. And that’s exactly what I did in Brescia.

The region of Brescia is part of East Lombardy, named as a European Region of Gastronomy for 2017 in recognition of its rich culinary heritage. Over the centuries the people of the area have worked with the unique natural resources of their fertile valleys, lakes and mountatins to produce dishes and wine that have been refined over time.

So what are the unique tastes of Brescia? 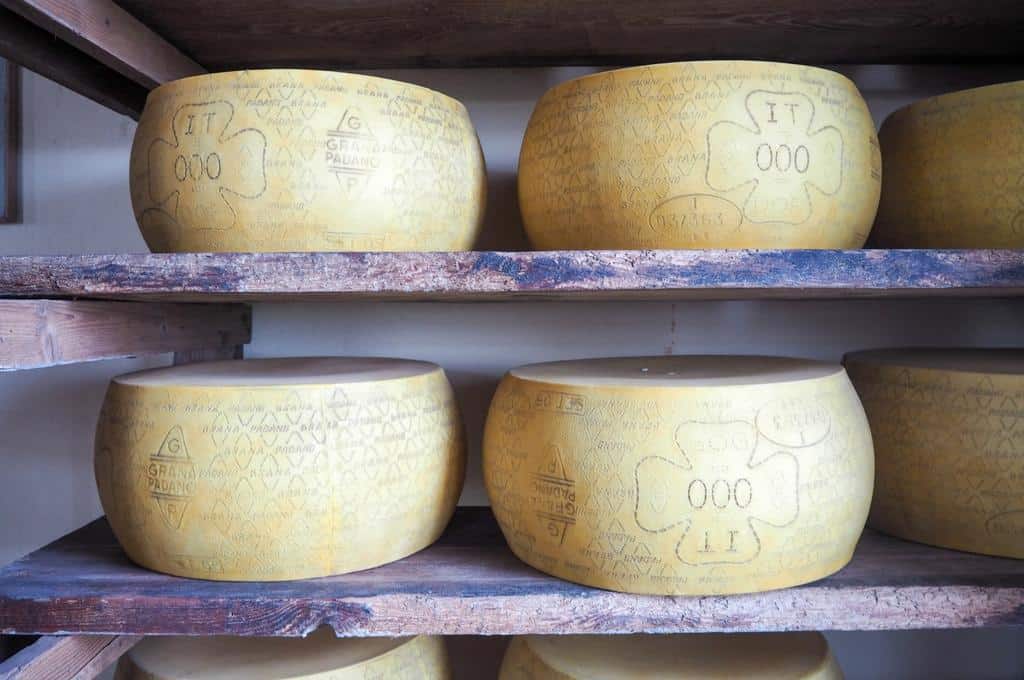 Brescia is heaven for cheese lovers. Thanks to the fertile Brescian plain and mountain pastures, there are hundreds of varieties of cheese produced in the region. Almost every town or region has its own speciality.

In the village of Bagolino, Bagòss cheese is made from the milk of Bruna Alpina cows who graze on mountain pastures. Pear shaped Provolone Valpada is made from spun curds of cows milk and Fatulì is produced from goats milk.

But the most famous of these is Grana Padano. Made to a 1,000 year old recipe from raw cows milk, the cheese is known worldwide for its hard crumbly texture and piquant taste.

The lakes of the region are a bountiful source of fresh fish. In Lake Iseo over 23 species swim its waters including trout, perch and pike. Lake Garda is home to to pike, trout and rare carpione – a fish that can only be found in Lake Garda.

Dishes made with the local fish are simple and cooked to enhance its natural properties. You can often find grilled whitefish with alla pescatora sauce on local trattoria menus. 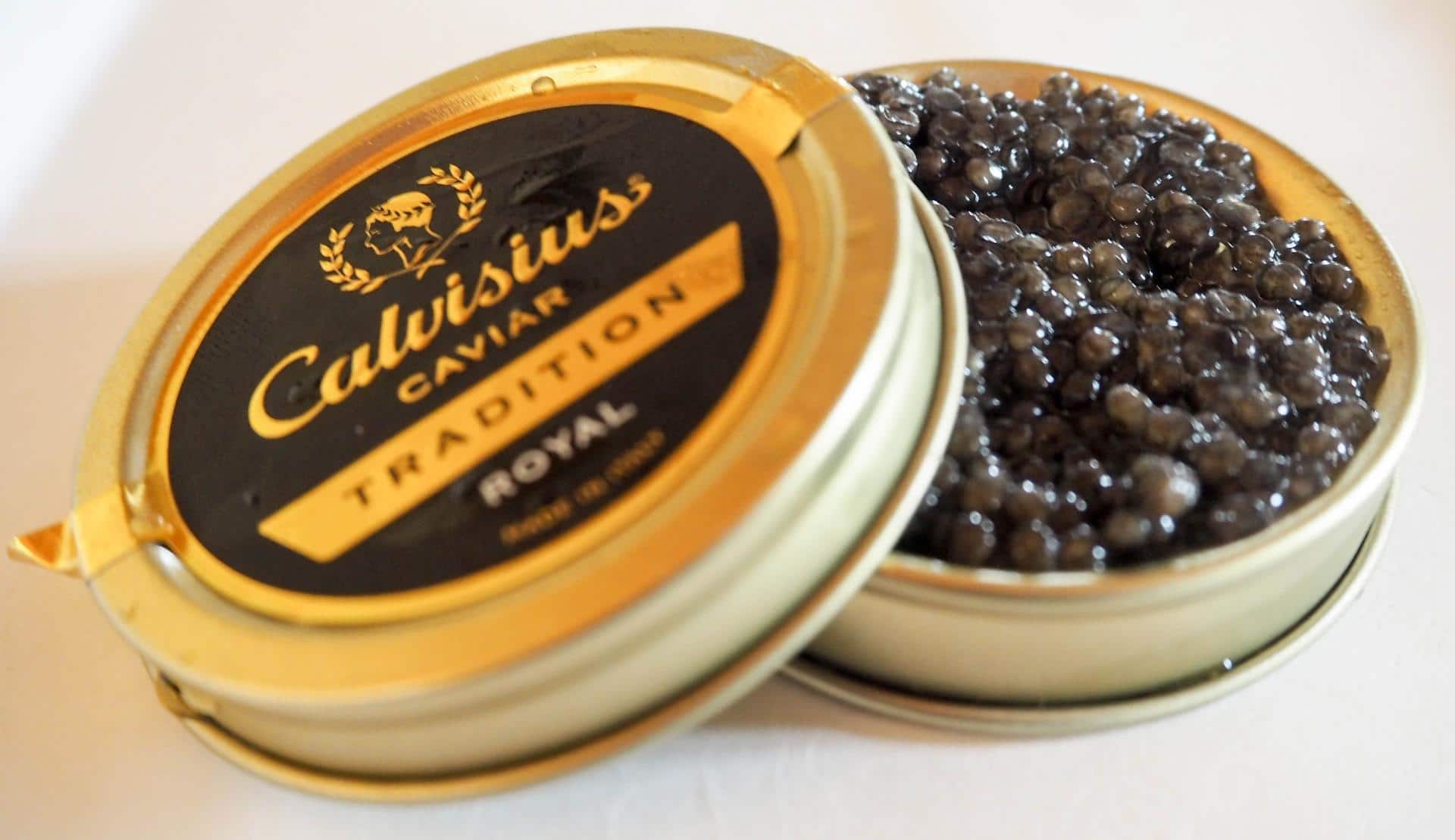 I had no idea Italy produced fine caviar until visiting Brescia. But it makes sense now. An abundance of fresh spring water in the region’s Po river valley provides the perfect conditions for farming sturgeon for caviar.

Calvisius Caviar pride themselves on respecting their environment and sturgeon which, in turn, yields a superior product. Fish are reared for 12 years before the caviar is extracted using manual methods.

This ensures the caviar is creamy and delicate. It is perfectly matched with the local Franciacorta sparkling wines.

Olive oil from the shores of Lake Garda

Olives have been grown in Italy’s lakes region for over 2 thousand years so the locals know a thing or two about producing extra virgin olive oil.

It’s a delicate process. Especially if you want to extract the health benefits that the oil is marketed for around the world.

The oil produced in Brescia is made from Casaliva, Frantoio and Leccino olives and is light and peppery. And, like all the best extra virgin olive oils, it has a low level of acidity. This is due in part to the grape varieties and also to the methods used to extract the oil – refined and enhanced over the centuries.

Olive oil is used widely in the region’s cuisine as it enhances the flavour of the local produce – especially fish. 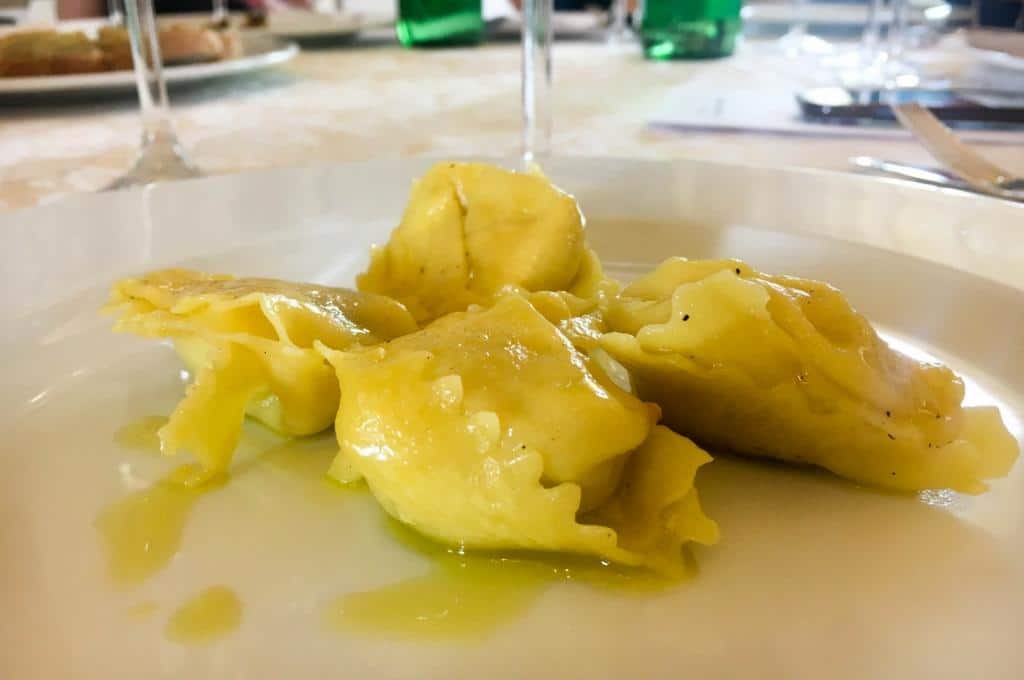 You can’t mention Italian food without discussing pasta. When you visit Brescia, casoncelli or stuffed pasta is on the menu. Hand rolled pasta is filled with meat, breadcrumbs and herbs and folded into the shape of a bonbon.

The pasta is gently cooked and served with a sage butter sauce. Yes, it’s delicious 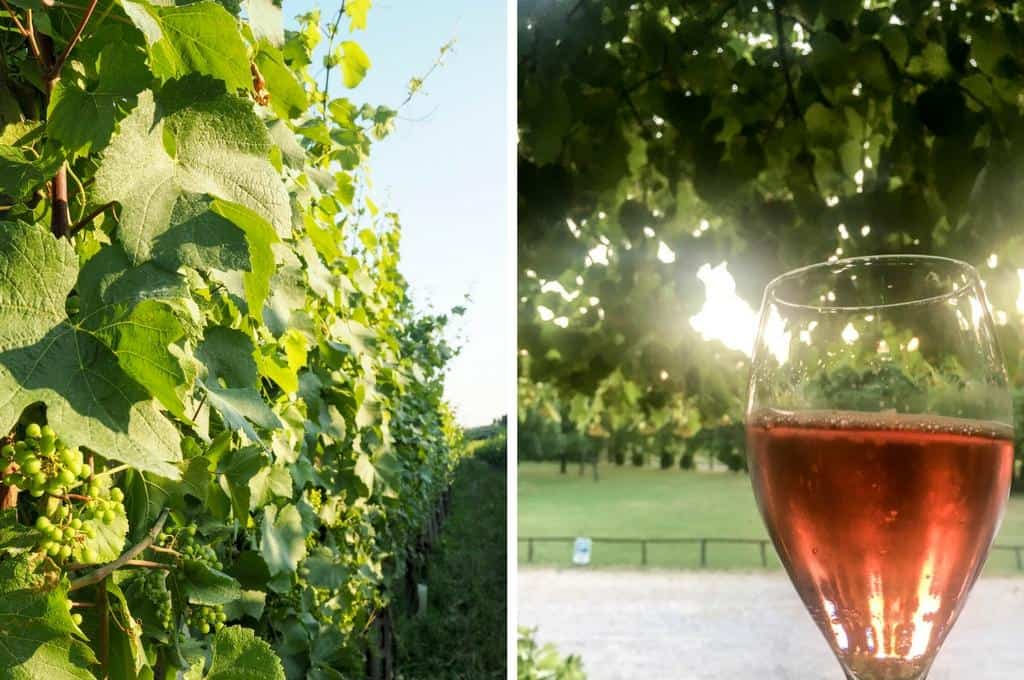 In Brescia they are proud to produce 10 DOCG and DOC wine varieties – those that have been specially classified to recognise the quality and authenticity of the production methods.

The most famous of these is DOCG (controlled and guaranteed designation of origin) classified sparkling white variety – Franciacorta. The wine is made to the traditional method with two fermentations, the last in the bottle, and aged at least 18 months.

Franciacorta takes on the quality of the region’s rich mineral soil and is made from a blend of chardonnay, pinot noir and pinot blanc grapes. 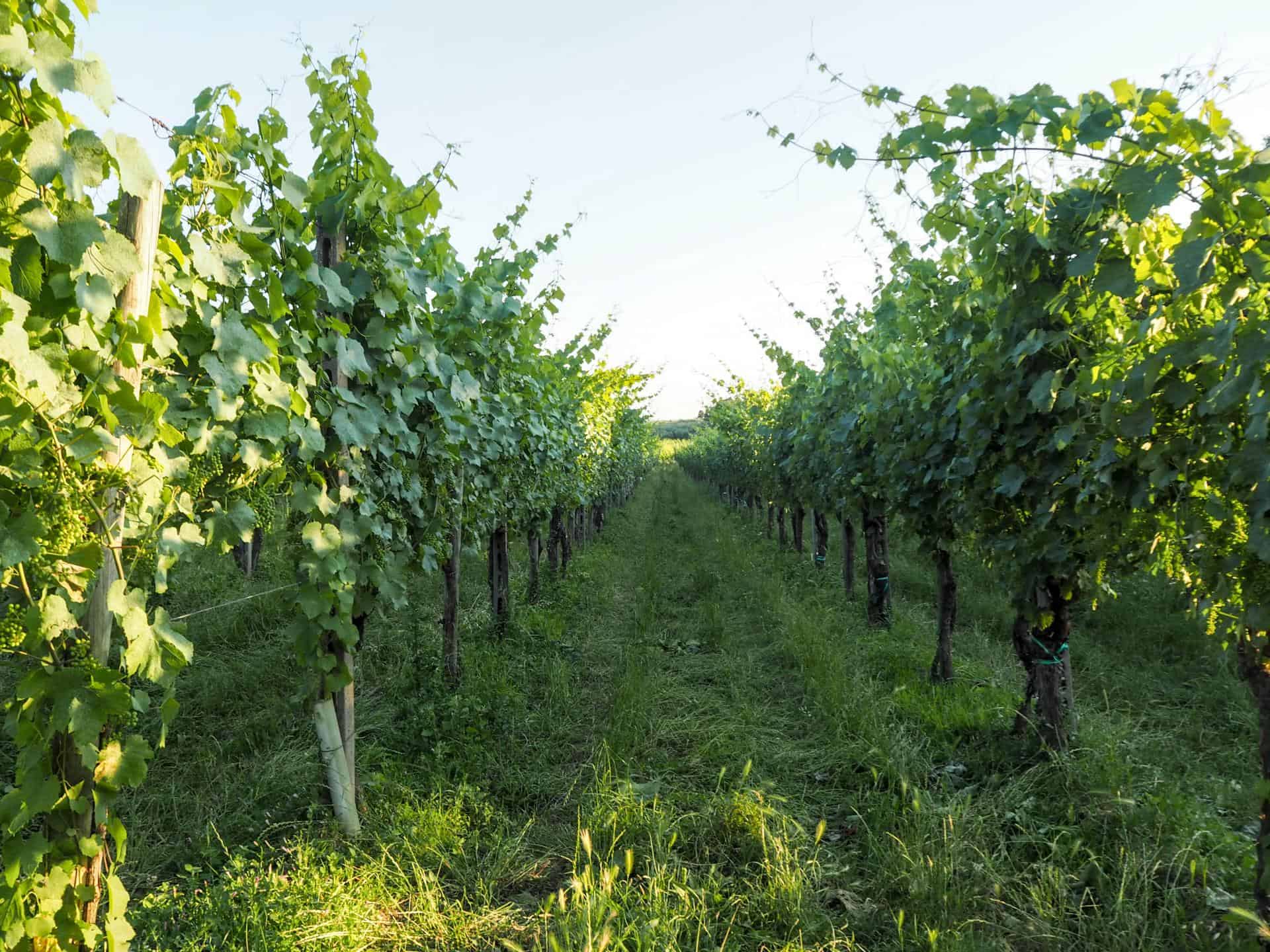 Brescia’s terroir and unique micro climate close to the lake are the perfect conditions for growing the Trebbiano di Lugana grape variety. This local variety produces a rich and golden wine known as Lugana usually drunk as an aperitivo or with lake fish.

Along the Colli dei Longobardi Wine Route there are many treasures to be found including the world’s largest urban vineyard. Found at the base of Castello di Brescia are 4 hectares of ancient vines that produce both white and red wines. 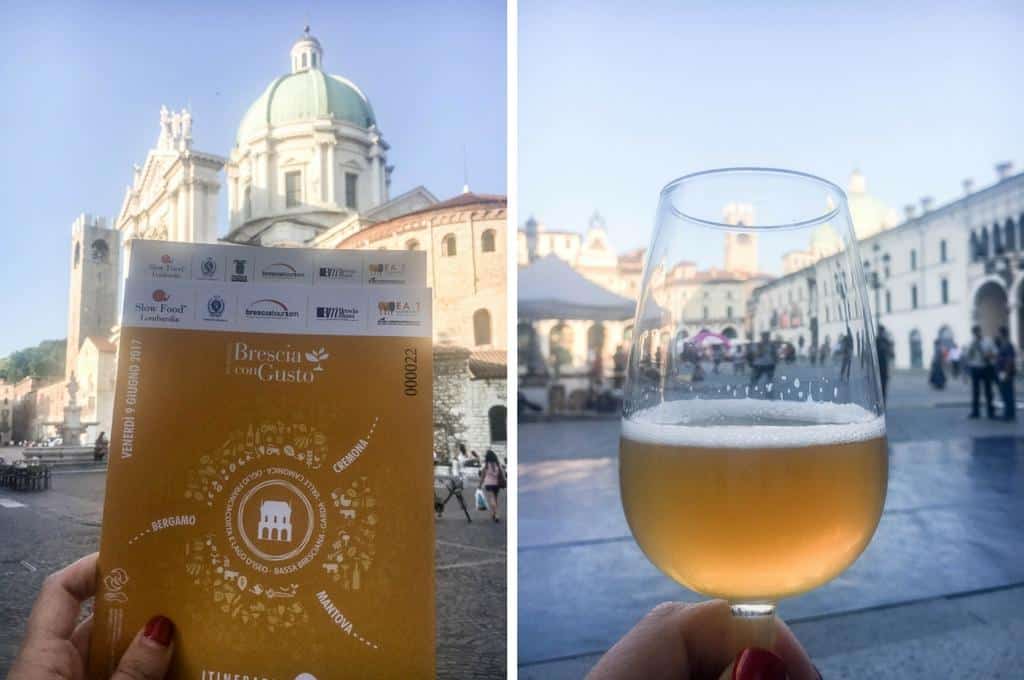 Having stumbled upon a food festival in nearby Como last year, I jumped at the chance to join Brescia’s annual slow food festival – Brescia con Gusto.

Since 2000, producers, restauranteurs and wine makers of the region have gathered to celebrate their food and wine culture over a night of feasting and gathering.

The festival is a walking tour of some of Brescia’s historical sites, stopping along the way to enjoy dishes made from the local produce by the city’s restauranteurs. Each dish is matched with a regional wine. 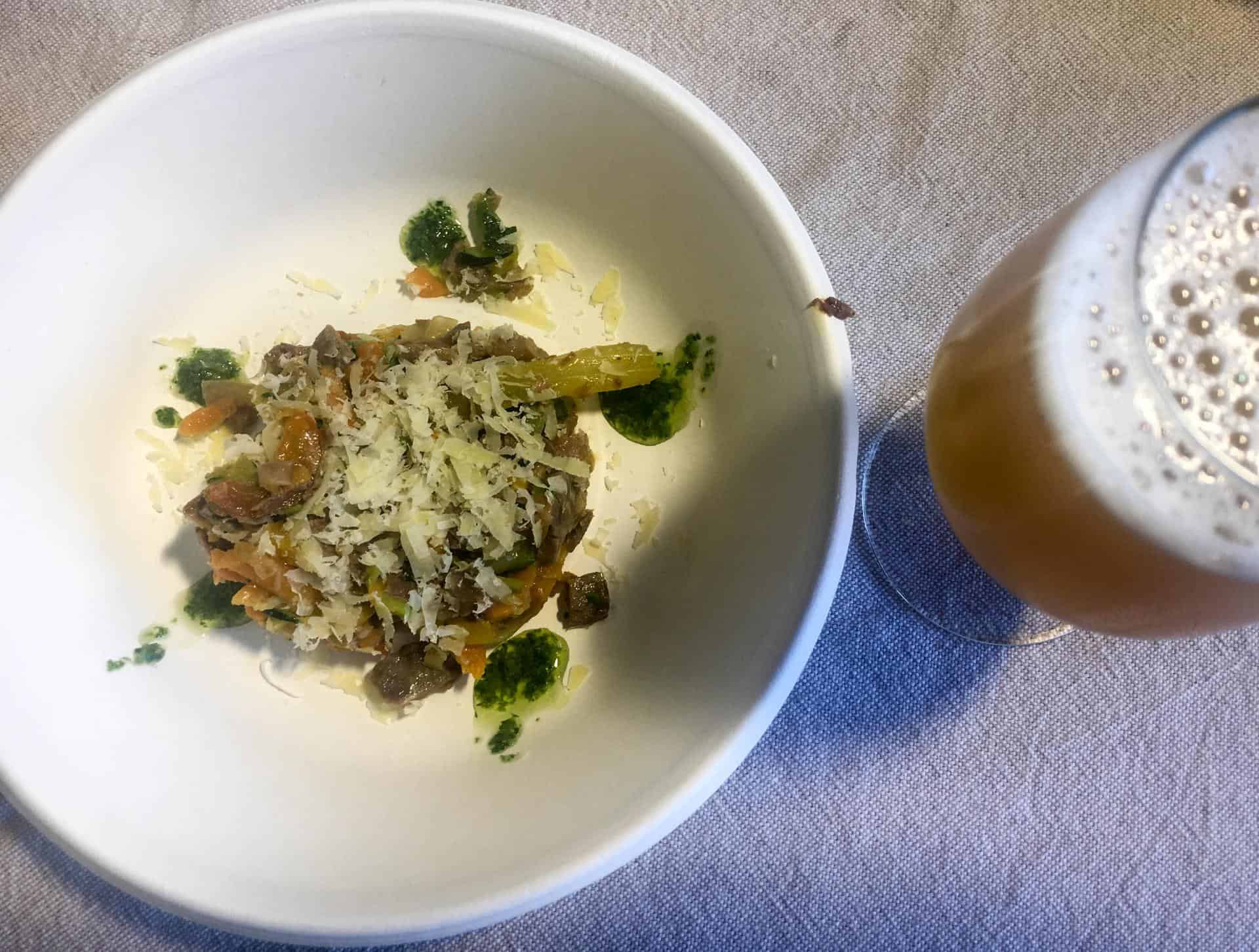 Brescia con Gusto offers 4 routes showcasing the food and wine of 6 different restaurants and wine makers. We followed route D and tasted a local beer, fish from the lake, and a salad made from farro.

The highlights of the evening for me were the Pappardelle al salmì di lepre (pappardelle with hare stew) and Valcamonica rosso IGT by Cantina Bignotti. You can try the rabbit stew at Osteria La Grotta in Brescia’s centro storico or old town.

I can’t think of a better way to discover regional cuisine than through this relaxed and friendly festival. Leaning against an ancient fountain as I ate my pasta, I wished everyone could experience Brescia con Gusto.

Not just for the wonderful food and wine but also for the opportunity to learn about its origins and history from the people who make it. 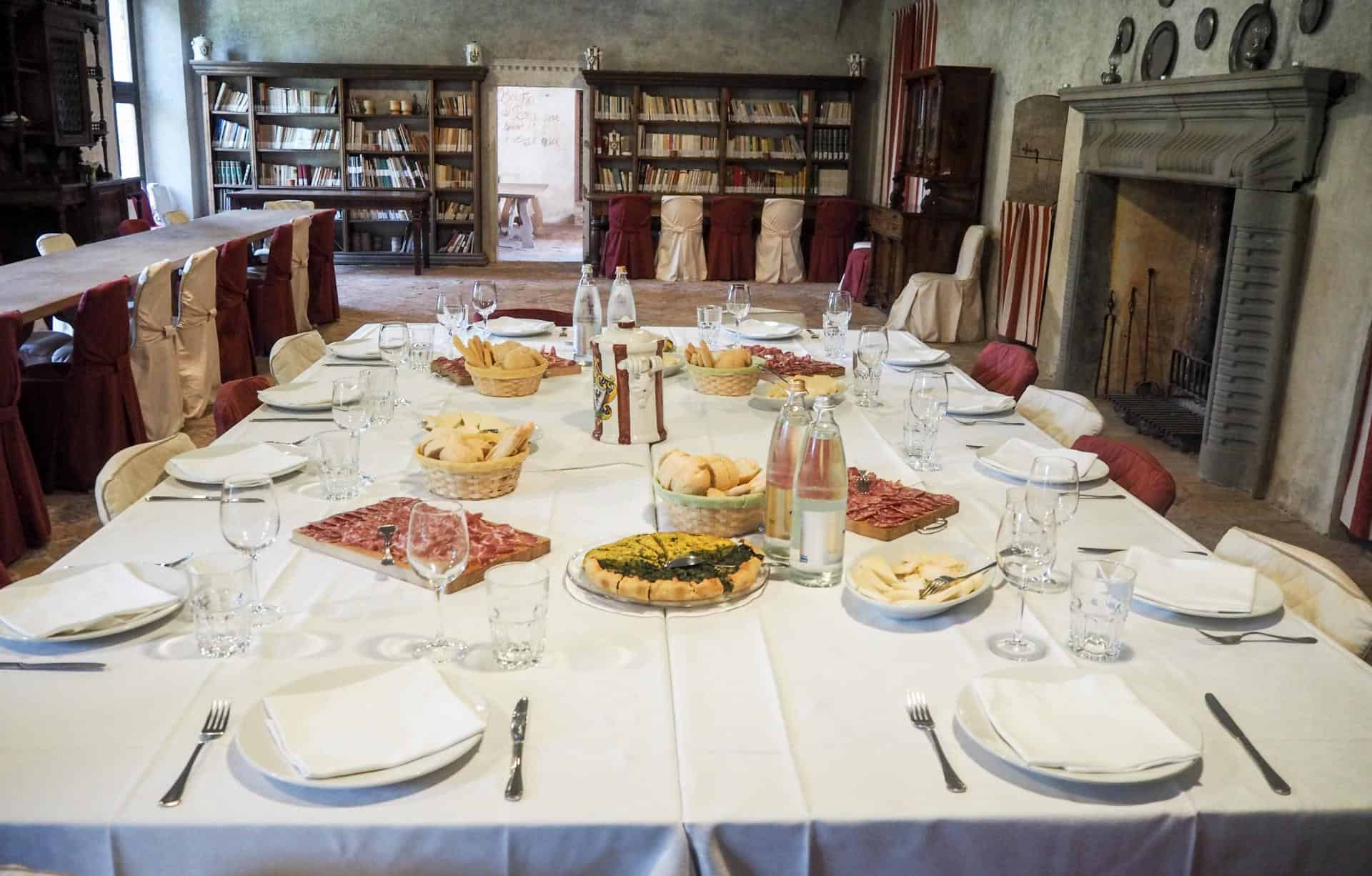 Where does our food come from? What are the processes and science behind the taste?

These are not conversations we have often in Anglo Saxon culture. But we should.

In a world where chronic illnesses are flaring and health gurus promote every kind of diet imaginable, isn’t it time to stop, slow down and respect the centuries of knowledge and experience of farmers and food producers such as those I met in Brescia.

After all, they draw upon thousands of years of experience and knowledge to create tastes that you talk about forever.

I was a guest of Brescia Tourism for Brescia con Gusto 2017. All opinions are my own.